Stop and think about this for a moment.

It seems to me that the members of the "Rat Pack", save for Joey Bishop, had all given it a go as detectives or secret agents in the movies. In Peter Lawford's case, he top-lined a short-lived adaptation of the Thin Man for television well before his compadres went to gumshoes for the movies.

In "Tony Rome", the title hero is hired by different members of a wealthy family on a number of issues, chief among those a diamond pin that had gone missing when Rome was summoned to pick up a young heiress who was on an overnight bender. If I could hazard a guess, I'd say Albert used Dashiell Hammett's Maltese Falcon as inspiration for his story, Miami Mayhem, on which "Tony Rome" was based.

Sinatra is supported by an ensemble cast that includes Jill St. John, Gena Rowlands, Simon Oakland, Lloyd Gough (The Green Hornet), and, in cameos, boxing icon Rocky Graziano and Joe E. Ross (ex-Car 54, Where Are You).

Edit, 11/4/19: The trailer I had was deleted. We're trying something new, so here's a copy of the movie poster, pulled from a Wikipedia entry on the movie: 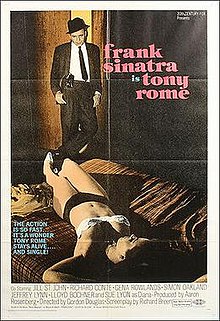 There was one more Sinatra involved in the movie. Daughter Nancy recorded the title song, but there was not enough room to give her a cameo. Hey, you can't have everything.