Oh, these books have to go: Six Dr. Seuss books to cease publication

In 2019, a heretofore little known study conducted by the University of California-San Diego (UCSD) discovered that the late author-artist Ted "Dr. Seuss" Geisel had used negative stereotype images in some of his books. I'm pretty sure you know which ones. Depictions of Asians, Arabs, et al, drawn in the Seussian style.

On Tuesday, a day set aside to honor Geisel, Dr. Seuss Enterprises decided to pull six of his works from bookshelves.

Following is a press release from Dr. Seuss Enterprises: 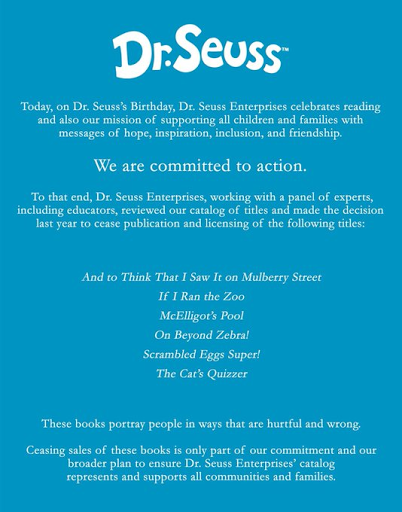 Of those, I think I'm only familiar with And to Think That I Saw it on Mulberry Street. The others are lesser known titles I had not heard of until now.
What's next? Will other cherished children's classics end up getting yanked for political correctness, inclusiveness, or some other logical, but ill-applied reason? Stay tuned.
Posted by hobbyfan at 5:38 PM

I read 'Mulberry Street' 'On Beyond Zebra' and 'The Cat's Quizzer'. I've seen "If I Ran the Zoo' on shelves, but I never read it'. The last 2 I never heard of before this story broke.

Of course the usual bloviators are whining about 'cancel culture', even though Seuss' organization wasn't pressured into dropping these titles, they chose to stop publishing them themselves. Is it 'cancel culture' if you censor yourself?

Personally, I would just add a disclaimer onto these books stating that some of the imagery and depictions in them were products of a bygone era and not cool by today's standards (heck, 'Mulberry Street' was written in 1937), but at the end of the day these are all relatively obscure titles, so I gotta chalk this one up as No Big Deal.

One more thing: the company's decision to stop circulating these 6 titles was made A YEAR AGO. So why are people up in arms about this only now?

People are dying of a pandemic and these clowns have spent the last two days obsessing over Mr. Potato Head and Dr. Seuss. Sad.

I wonder if any of the rightwingers who are so loudly "defending" Dr. Seuss these days -

- I wonder if they are aware that Ted Geisel was not only a lifelong Democrat, but started out as a political cartoonist for the farthest-left newspaper in New York City, PM.

Comes to that, I also wonder if the "woke" leftists who wanted this to happen are aware of this same fact.

Nobody these days seems to have a sense of history ... or any sort of memory.

@Silverstar: It's taken this long to bring this to the headlines because of the pandemic dominating the news, along with a certain geriatric jackass that couldn't do his job on the pandemic.

You're asking for a disclaimer, kind of what Disney+ is using for their old movies that have similar issues. We've seen that on television a good deal of late.

@Mike: None of the whiners on either side probably knew any of that because they can't be bothered to actually, you know, research their stories.