When will NFL owners stop hiring coaches from the college ranks? It hasn't worked in recent years, and, this morning, Urban Meyer may be looking more for another TV gig, if he can find one.

Meyer was cut loose by Jacksonville Wednesday, with four games left in the season. The Jaguars are 2-11, not even close to where they thought they should be after hiring Meyer and drafting Trevor Lawrence to be their franchise quarterback. Allegations by a former player that Meyer kicked him were the final straw. 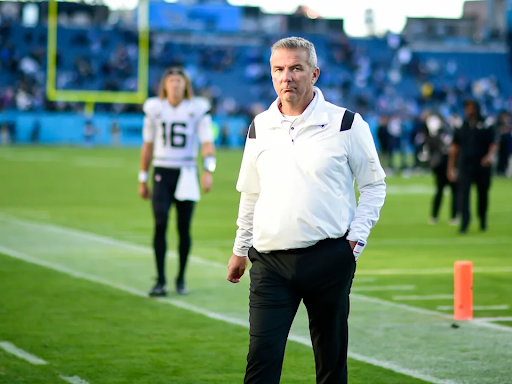 Photo courtesy USA Today via Yahoo!.
Meyer, who's been a studio analyst for both Fox & ESPN in between coaching gigs, might not be hearing from them right away, but we wouldn't be surprised if he does.
===========================================
The Omicron variant of COVID-19, coupled with the Delta, has led to college & pro sports teams shutting down, at least in spurts. A few NHL teams, including the Islanders and Chicago, have had games postponed already. There've been outbreaks on NBA & NFL teams, too.
===========================================
The GOP and right wing media have made it their mission to purposely misinform their base about COVID, the January 6 insurrection, and other issues. They want to keep their base ignorant.
Then, it gets out that former presidential aide Mark Meadows received texts from Fox Shmooze evening hosts like Sean Hannity and Laura Ingraham, and from Donald Trump, Jr., asking the latter's father to stop the insurrection. Nothing happened, of course, and Ingraham, in particular, went on the air later that night to falsely blame antifa for the riot. Why? Because the GOPers don't want their low information base to know the truth about what happened that day.
However, the truth will soon send Meadows, the Trumps, and others to prison.
Add Ingraham. It got out yesterday that her brother, Curtis, wants her subpoenaed. This should shock no one in the wake of news that Arizona's Goofy Gosar has been all but disowned by his family because of his extremist views.
This is what happens when you hitch your wagon to an unstable man-child. Your career is doomed.
Posted by hobbyfan at 8:15 AM