If your team is having a bad season, you're not going to get the benefit of late game calls from the officials. It's that simple. I pointed this out a ways back when the Giants seemed to get screwed in a home loss to Tampa Bay.

This selective officiating came into play again on Tuesday, and this time the Seattle Seahawks were the victims. The beneficiaries? The Los Angeles Rams, who are grappling with the Arizona Cardinals for first place. Seattle, meanwhile, in a down year, is trying to avoid falling into the division basement.

Late in the game, a defensive pass interference call wasn't made against the Rams, who went on to win the game, 20-10. Seattle coach Pete Carroll and his players were, understandably, upset. It's been nearly six years since the Rams benefited from a no-call in the playoffs against New Orleans. 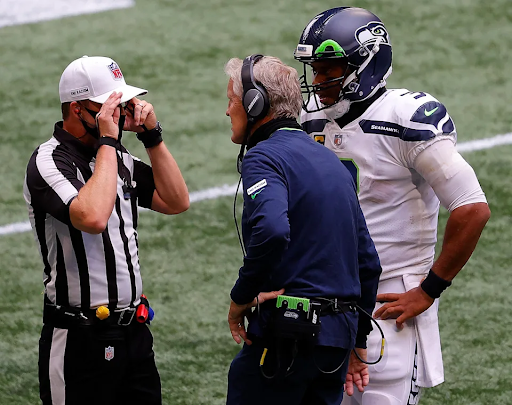 Of course, the Seahawks were called for a penalty after the play, when receiver DeeJay Dallas booted the ball, drawing a 15 yard penalty for unsportsmanlike conduct. The referee? Second generation zebra Shawn Hoculi (Ed's son). In reality, the fouls should've offset, if Hoculi's crew had seen fit to get the initial play called correctly.

Dallas' post-play stupidity aside, we saw a similar scenario in the NFC title game last season between Green Bay & Tampa Bay, and it was clear then that the league office was directing preferential treatment to the eventual Super Bowl champions. This bias needs to be expunged from the league yesterday, but it won't, because there's advertising dollars involved (i.e. endorsement deals for "protected" players), as well as, of course, television ratings.

In case you wonder, they have the same problem with the college game. Same in basketball, too.
========================================
Are you tired of seeing Jackson State coach Deion "Prime Time" Sanders chillin' with Alabama's Nick Saban in an AFLAC ad currently in heavy rotation? They even went back and dug up Sanders' 1-shot on the charts, "Must be The Money", from the 90's.
========================================
We've known for some time how wrestlers are also comic book fans.
Former ECW champion Raven (Scott Levy) landed a 1-shot deal with Marvel nearly 20 years ago to do a Spider-Man story that revisited a key piece of the webhead's history. CM Punk, now with AEW, has written for DC & Marvel, while wife AJ Mendez (formerly AJ Lee) has done miniseries for IDW.
Add former AEW women's champion Nyla Rose to the list.
Rose, the first transgender wrestler to hold a major championship, makes her comics debut this spring, writing an X-Men one-shot for Marvel, co-authoring with Steve Orlando a tale of former X-Man Thunderbird, who was initially killed off after the "new" X-Men's first mission 46 years ago. Of course, depending on the storyline, no one really stays dead in a Marvel comic.
Check it out when it comes out.
==========================================
The omicron variant of COVID-19 has forced the NHL into a total lockdown, if you will, until after Christmas weekend. One gets the feeling this won't be the end.
In fact, the College Football Playoff might not come off as scheduled on New Year's Eve if there are COVID outbreaks on the teams entered in the tournament, and there is talk that if 3 of the 4 teams can't play, the one remaining team will be declared the champion.
Stay tuned.
Posted by hobbyfan at 5:57 PM