It must've been a slow news day somewhere on Thursday.

A story came out on Yahoo!, alleging that two well known brands of deodorant contain cancer-causing chemicals, to the point where the company is facing---get this---17 different lawsuits.

Old Spice, now part of Procter & Gamble, and Secret, a long time P & G staple, are the brands in question.

Before we go further, let's take a trip back in time to before P & G acquired Old Spice from Shulton. The latter company commissioned this Christmas ad many moons ago.

Most consumers are paranoid already over COVID-19. Why give them something else to stress out over? Apparently, a scientific study had been commissioned. Take it with a can of salt if you don't believe it.
========================================
The late Andy Warhol said that in the future, everyone will be famous for 15 minutes.
So along comes another desert dimwit to inform us how stupid he is.
Blake Masters, a Repugnant candidate for US Senate out of Arizona, went on Tabloid Carlson's garbage hour, and made the outlandish claim that Tesla & Space X founder Elon Musk, a native of South Africa, is African-American, making the mistaken distinction that a white South African falls under the same heading as African-Americans, since Musk emigrated to the US as a teenager. Carlson went into hysterics, laughing at Masters. 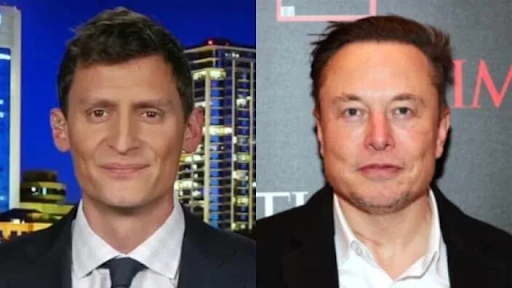 You can tell which one of these two is death warmed over, can't you? Hint: It's the idiot on the left.
Masters, during his interview, also took aim at Massachusetts Senator Elizabeth Warren and House Speaker Nancy Pelosi, calling them corrupt. Please, it's not like they've heard that before. Masters, predictably, was roasted on Twitter for his remarks about Musk. Someone check and see if this clown is color-blind.
What he is, of course, is a dunce. And, so, we're making sure this gets rushed to the desert....... Merry Christmas to you, jackass.
===========================================
8 months after former Minneapolis police officer Derek Chauvin was convicted of murder, a suburban Minnesota officer has been found guilty.
Kim Potter tried the emotional approach of crying on the witness stand, since it worked for Kyle Rittenhouse, but this time, the jury wasn't buying her claim that she confused her service revolver with her taser. Potter will be sentenced in February, but is spending the holidays in jail, her bail revoked.
Speaking of Rittenhouse, Fox Shmooze's Toni Lahren went on the air the other night, and tried to convince the GOPers to just back off on Rittenhouse, and let the dude live his own life. He was a guest, complete with a WWE-style entrance, at Charlie Kirk's AmericaFest event last weekend, which suggests certain GOPers are luring him with money. They want him to enjoy his 15 minutes as much as possible, likely enabled by his mom, for all we know.
The GOPers are mostly false patriots, willing to exploit a kid like Rittenhouse, and piggy-back off those 15 minutes. Spare me.
Kyle, get thee to the nearest confessional. Yesterday.
Posted by hobbyfan at 7:11 AM