Tabloid Carlson lies on the air, and a man-baby swears by it. Just another day in the land of the brainless

Monday night, Tabloid Carlson claimed that the National Security Agency (NSA) was spying on him.

Tuesday, the NSA issued a statement denying this happened: 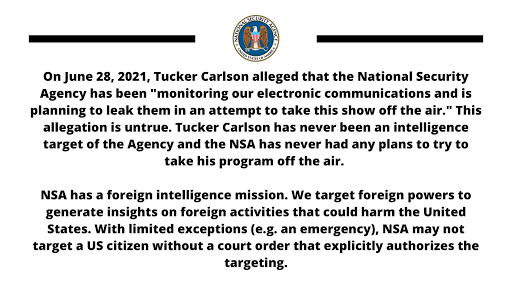 Tabloid is trying to play the victim here, but he has no case. The NSA, as stated above, is only in business to cut down foreign spies, not domestic cases. For Tabloid, it was a slow news day. Later Tuesday, Tabloid doubled down on his lying, and, of course, America's Oldest Baby supported him.

So why is Tabloid lying on the air? Because it's an easy way to get the attention of his low information viewer base, aka the Legion of The Brainwashed. Besides, it's not the NSA's place to knock Carlson off the air, as he's claiming. That would be the role of the Federal Communications Commission (FCC) if they felt that Carlson abused his position to intentionally misinform his audience, and there's certainly a case for that. This time, Carlson can't hide behind the schtick that he's "just asking questions" or stating opinions. He is openly lying to the public, that's all there is to it. Fox Shmooze can't save him from litigation this time, and they shouldn't. Instead, they're complicit for allowing him to present lies as facts.

One of these days, the FCC will be the one to shut down Tabloid and the rest of the Fox Shmooze Liars' Club. It's inevitable.