WWE makes some cuts that will come back to haunt them

The word going around WWE is that "budget cuts" are the reason six "superstars" were cut on Wednesday. There are rumors, however, that it's more than that. 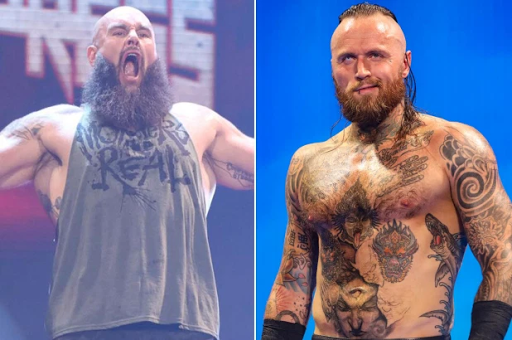 Photos courtesy WWE/New York Post.
Braun Strowman (photo left; real name Adam Scherr) had just been in a WWE title match, a three way against champion Bobby Lashley and former champ Drew McIntyre, just days earlier. His is the release that has a lot of fans shaking their heads.'

Aleister Black (photo right; real name Tom Budgen) was about to begin a program with Big E, but that was abruptly dropped after a month's worth of intriguing promos in which he was reading from a storybook. Wife Thea (formerly Zelina Vega) was rumored to be returning. Budgen went on his wife's Twitch stream and revealed he was told this was due to budget cuts.

Lana (Catherine Perry-Barnyashev) had, with partner Naomi (Trinity Fatu), challenged for the women's tag titles on Monday. Being with WWE raised her profile to the point where she landed some movie roles, including the "Pitch Perfect" series. Everyone assumes she'll join her husband, Miro, in AEW.

Ruby Riott (Dori Prange), like Lana, was in a tag title match just days earlier, this time on Smackdown. Her departure may be because current Raw women's champion Rhea Ripley, a younger wrestler, has a similar look, that of a retro-punk rocker, more than budget reasons.

Buddy Murphy, a former cruiserweight & tag team champion, had disappeared after a brief resumption of his program with Seth Rollins.

Santana Garrett, a journeywoman who'd previously been on the short lived revival of Ring Warriors, was used mostly as enhancement talent on NXT, Raw, & Smackdown, but hadn't been used in weeks.

There are a number of other factors involved, including the rapid rise of Nick Khan, was was named to the board of directors earlier this week after less than a year with the company. His growing influence seems to be pointing WWE further into the entertainment side of things. This has also led to rumors of Vince McMahon, who will be 76 in August, selling the company, something long considered impossible, but, while unwilling to admit that the decline in television ratings has been largely his fault, he may be getting to the point where the drive to succeed just isn't there anymore, and, rather than hold on to the company to pass it down to his grandchildren, might be listening to offers from NBC-Universal-Comcast, Disney, et al, to settle into the retirement that he had publicly said he wouldn't entertain all the way back in 2009.

I'd imagine it has.