If you're a Republican, you should be ashamed!

Today's Repugnant Party is all about appeasing a 70-something man-child who will never admit publicly he got his butt whooped at the polls nearly 6 1/2 months ago, taking his cues from a Texas twit who began sowing doubts about his own election failures two years prior to the 2020 Presidential election.

An hour ago, the Repugnants decided to remove 2nd generation politico Liz Cheney, R-Wyoming, daughter of former Vice President Dick Cheney, from her leadership position, which would make her the #3 in terms of power among the GOPers, because she has refused to back down on her belief that the Repugnants should move away from Citizen Pampers, aka Donald Trump. 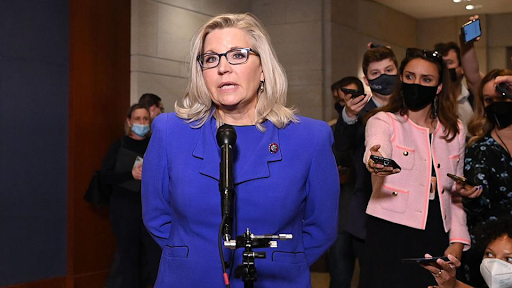 The Repugnants would rather buy into the Big Lie, that Trump had the election stolen from him, despite the fact that there is no evidence to support his delusions any more than Russell Ramsland in 2018 when Ramsland failed in a bid for a Congressional seat. They are looking at Trump for what he is, a celebrity and a proven charlatan who lacked the charisma of the last "Hollywood-type" that was in the White House before him, that, of course, being the late Ronald Reagan, who parlayed his acting career into a successful political career, ending when his term ran out in January 1989.

Trump, in effect, is the Anti-Reagan. No charisma. No political experience until his election in 2016, and even that was via the Electoral College because he lost the popular vote to Hillary Clinton. But, if you believe his detractors, Trump has been a career con man, famous just for being famous, just because he was a Noo Yawka.

The Repugnants are set to tap Schuylerville's Elise Stefanik as Cheney's replacement, despite the differences in the two women's voting records. The Repugnants don't like that Cheney won't kiss the ring or bend at the knee for Citizen Pampers.

However, it could all go for naught, given the fact that Trump is facing several lawsuits in New York, as well as a criminal investigation into some shady things. If Trump goes down, and it would be a major disappointment if he didn't, but all the signs are pointing toward him going down, then the Repugnants will have more eggs on their collective faces for supporting a sore loser.

And if that happens, what excuses will they have?