On The Shelf: DC salutes Asian-American/Pacific Islander heritage month, and much more

We left this first item off last week's review.

DC Festival of Heroes: The Asian Superhero Celebration (cover price $10) also includes heroes of mixed race, like Robin (Damian Wayne), Green Arrow (Connor Hawke), and Grace Choi, plus the debut of Monkey Prince, who, despite being a hero himself, isn't exactly a fan of his new fraternity, if you will.

Apparently, DC has a lot invested in Monkey Prince, as he's likely going to resurface later this summer. But if he turns you off, I don't blame ya. The best parts are a Hawke team-up with Super-Man from China, and a Batgirl (Cassandra Cain) solo story that leads off the volume. The variant cover of Cassandra by Stanley "Artgerm" Lau is worth the price of admission alone.

Rating: A-.
===================================
Now, on to this week's releases.
When Archie Comics promised a Archie & Friends 1-off devoted to their superheroes, I fell for the bait. I say that because instead of having the Superteens meet, say, the Mighty Crusaders, we get four short stories, two apiece featuring forgotten Archie heroes such as Blackjack & Bob Phantom. Archie does appear as Pureheart the Powerful, and in the two Blackjack shorts, Veronica dons a new identity as Powerteen. Drawn in the old school Archie style of the 60's-90's, these four short pieces fly by, and Blackjack & Bob Phantom are not meant, in the editors' eyes, to be taken seriously. 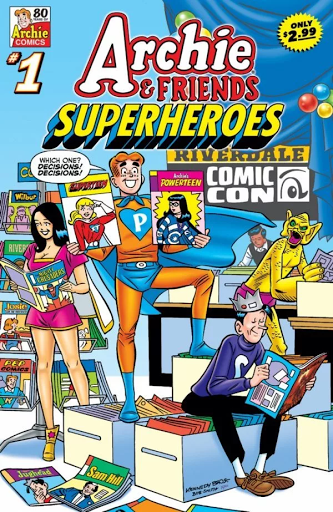 BIG MISTAKE!!! Writer Ian Flynn, who should've known better, disappoints with this ham-handed approach. Even worse is Archie's decision to turn the Crusaders, starting with the Shield, over to Robber Liefeld. Someone send them a copy of Santayana, why don't ya?
Rating: C.
===================================
Last year, Marvel experimented with a new take on one of their iconic characters with Spider-Man: Life Story. That merits an annual, out in August. In the meantime, they're giving the Fantastic Four the Life Story treatment, with this volume written by Mark Russell, and drawn by Sean Izaakse, whose detailed artwork requires the book to be released on a every 6 weeks basis, it seems, since the 3rd issue won't be out until August. It's a 6 issue miniseries that should give fans a better handle on the FF as they approach their 60th anniversary.
Rating: A-.
=====================================
After her debut in Future State: Wonder Woman, Yara Flor gets her own series as Wonder Girl, written & drawn by Joelle Jones, who left Catwoman, apparently, to take the assignment. Anyway, Yara apparently is in the center of a budding war between the Amazons we know, and the tribe from South America. Hmmmmm.
Rating: Incomplete.
====================================
DC is reviving Legends of The Dark Knight as a digital first series, with the first arc written & drawn by veteran Darick Robertson, who sets Batman against some familiar enemies in Mr. Freeze, the Joker, and the Penguin, and it has to do with a Russian selling some deadly gas. Been there, seen that. A better take, though.

Rating: A.
=======================================
Not long ago, Marvel released a one-shot special featuring Morbius, The Living Vampire, with writer Ralph Macchio at the controls. Unfortunately, Bond of Blood is undone by artist Tom Reilly's poor depiction of the tragic Michael Morbius, whose battle with Mr. Hyde could've been better handled by a better artist. That's all I'm going to say.
Rating: C-.
Posted by hobbyfan at 12:09 PM