The future of women's gymnastics (and other sports)?

A German gymnast may have found the solution to the long standing problem of the sexualization of female athletes in her sport and others.

Sarah Voss has swapped out the traditional one-piece leotard for a bodysuit that extends all the way to her ankles. 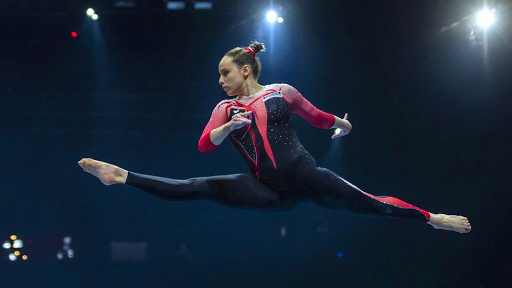 Photo courtesy BBC News website.
In the wake of a scandal here in the US that exposed how certain people in positions of authority (i.e. Larry Nassar) exploited young women by subjecting them to sexual abuse and assault, a scandal brought to light by US Olympian Aly Raisman a few years ago, Voss may have just given women's gymnastics a means to allow young athletes to retain some innocence in competiton. Can you picture gravity defying Simone Biles, for example, in one of these suits?

And it doesn't limit itself to gymnastics, either. At the Rio Olympics in Brazil, women's beach volleyball players swapped out bikini briefs for shorts. That, friends, may have set the wheels in motion.

Back at home in the 518, certain local newspapers stopped publishing the pictures of candidates for Homecoming Queen & Court at various high schools, including Troy High about three years ago for the simple reason that in today's world, the perception of these young ladies being asked to assume "provocative" poses for an annual tradition became one of these teenagers being sexualized.

High school & college cheerleaders, in cold weather, will leave their warmup suits on over their uniforms. The uniforms themselves, though, could be next for a redesign. I've seen many cases at the college level on TV of female cheerleaders going airborne in intricate routines that give television cameras a free view of their "bloomers" under their skirts. Doesn't happen as often in high school, from what I've seen. Then again, most college cheerleading units are co-ed, except for competition, which has been, from what I've seen on TV, exclusively for women.

Sarah Voss is hoping the bodysuits become the norm, replacing the tight, one piece leotards. I can't say for sure, but I think the leotards were mostly phased out of aerobic exercise for women in recent years in favor of more casual attire

But if television ratings for, say, ESPN or NBC, for example, start falling when male viewers reject the bodysuits on the young ladies, I'd worry.