We touched on this over at Saturday Morning Archives earlier this week, but it bears discussing here, too.

The CW, jointly run by ViacomCBS & WarnerMedia, is reviving one of Nickelodeon's popular game shows of the 90's. Only this time, Legends of The Hidden Temple, per its original host, Kirk Fogg, is being targeted at adults, not children.

I think I get why. Any "kids" being interested would be the children of the show's original target audience and/or contestants. That would be a good way to make this more of a generational, legacy series. Interviewed earlier this week, Fogg looks like he possibly could return, too.

Stay tuned.
====================================
On the heels of the Legends announcement comes word that the CW will take the last step, and expand their primetime grid all the way across, adding a Saturday slate as early as next year.
Assuming the new Legends, like other game show revivals, is a hour-long block, it'd be a perfect match for Powerpuff, Greg Berlanti & Diablo Cody's updating of The Powerpuff Girls, which is reportedly already in production on a pilot.
Locally, WCWN (Spectrum digital channel 1212) will have to move Ring of Honor Wrestling's weekly show to a later time slot on Saturdays. It already airs Saturdays at 8 pm and Sundays at midnight. The only disruptions would be for Mets or Yankees broadcasts, usually on Friday or Saturday nights.
=====================================
The Centers for Disease Control announced Thursday that vaccinated citizens can go without masks outdoors and indoors, the latter except for crowded venues such as hospitals, nursing homes, theatres, et al, or on public transportation, such as buses and trains.
Here in New York, however, Governor Andrew Cuomo is advising caution, since there were 22 deaths attributed to COVID-19 on Wednesday. As ye scribe can attest, local businesses are still requiring masks for the duration, although that could change as summer approaches.
======================================
Is this the face of a high school student? 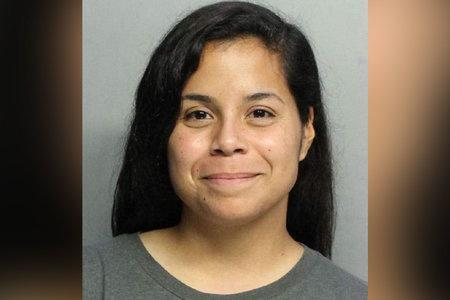 Photo courtesy of Yahoo!
Audrey Nicole Francisquini, 28, snuck into a Hialeah, Florida school, posing as a student, just so she could promote her Instagram page. Otherwise employed by Carnival Cruise Lines, Francisquini took advantage of a day off to attempt her little stunt. She evaded school security, but, unfortunately for her, her Instagram ads gave away her location, and she was arrested later in the day.
The other shoe dropping could very well be Carnival dumping her before she even goes to jail. Just desserts for this week's Weasel.
It was one thing when Hollywood hires actors to play characters much younger than the actors themselves, a practice as old as time, from Our Miss Brooks to Riverdale. But how is it possible that every time we hear about an adult posing as a student and getting busted in real life, it's usually in the south?
The above picture should make a good mug shot, and a caution to anyone else who wants to try something like this. It ain't ending well.
Posted by hobbyfan at 7:12 AM