Weasel of The Week: Ron DeSantis

This is just too easy.

Florida Governor Ron DeSantis, one of the biggest supporters of Citizen Pampers' presidency, banned most media outlets from an event this morning in West Palm Beach, where he signed into a law a controversy-generating bill that, like, in Georgia, restricts vote-by-mail access and scales back the number of ballot drop boxes in the state. In other words, it's legalized voter suppression. 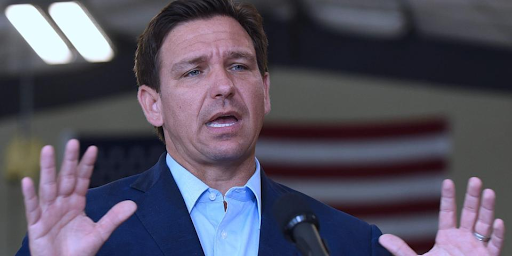 Photo courtesy of Yahoo!
Only Fox & Friends was allowed to cover the event, so what does that tell you? DeSantis thinks he's doing the right thing. Like his Georgia counterpart, Brian Kemp, he's disenfranchising minority voters in an attempt to ensure that the GOPers retain control of politics in the Sunshine State.

Why is this? Because despite the fact that there are African-American GOPers (Tim Scott of South Carolina, we're looking at you), most African-American voters tend to skew toward the Democratic party, according to studies.

Donald Trump exposed the warts in the GOP when he decided to run for President in 2015. Now, the GOPers are happy to wear those warts, even if it means putting their feet in their collective mouths on a regular basis. No amount of Compound W will fix that. DeSantis had his brains harvested to serve America's Oldest Baby, and signing a voter restriction bill makes him a Weasel. Enough said.

The only thing more pathetic than Twump is a wannabe Twump. (And yes, I spelled it that way on purpose; I refuse to dignify that toad's name by typing it correctly and my hope is by routinely mocking him, it takes more and more power away from him, so we can all just write him off like the sad clown he is.)

While I love your Fuddization of Trump, I call him Citizen (formerly President) Pampers and America's Oldest Baby because it fits.