The honeymoon is over between the Jacksonville Jaguars and coach Urban Meyer.

Prior to Sunday, Meyer was on the hot seat after he'd decided to stay behind after a game and put on his boogie shoes, if you will, at a dance club with a woman who was not his wife. As of now, the Jaguars, despite the moves they made in the offseason, signing Meyer, drafting Trevor Lawrence and Travis Etienne, et al, are 0-5, and have lost 20 in a row dating back to last season.

You might recall that Nick Saban flopped in Miami before reasserting himself at Alabama, and earning an endorsement deal from AFLAC in the process. Steve Spurrier was a dud in Washington. Meyer could still get a pink slip before Thanksgiving. Stay tuned.
=================================
The CW's Riverdale just ended its 5th season last month, but season 6 is right around the corner.
The series returns from a shorter-than-normal off-season November 16 on its new night, as it moves to Tuesdays, in back of The Flash. Head scribbler and co-executive producer Roberto Aguirre-Sacasa is addressing fans by finally pulling the trigger on a crossover with the recently concluded Chilling Adventures of Sabrina, which dropped its final episodes at the end of 2020. Kiernan Shipka will reprise as Sabrina, who finally ventures into Riverdale early in the season.
The curious part of the equation here is that Aguirre-Sacasa decided that Cheryl Blossom (Madeline Petsch) is dabbling in magic, and needs Sabrina's help. Never mind that Aguirre-Sacasa seemingly killed off the popular Sabrina at the end of her series (Boo! Hiss!!). For someone who claims to be a student of Archie Comics history, he has a peculiar way of honoring that history.
====================================
We've known for a while that DC and Marvel have gone out of their way to try to lure in LGBTQ+ readers, often opting to reboot existing, established characters (i.e. Iceman, Rawhide Kid) to fit the desired demographic profle instead of creating a fresh LGBTQ+ character fresh out of the box. Those are few and far between.
So the news today that Jonathan Kent, son of Superman, who was accelerated from youth to young adult under writer Brian Bendis, then given his own series just a couple of months back, is being remarketed as a bi-sexual, just like Tim Drake, one of the half-dozen Robin's on the roster, past, present, and future, a few weeks ago, is being met with a yawn from this desk. 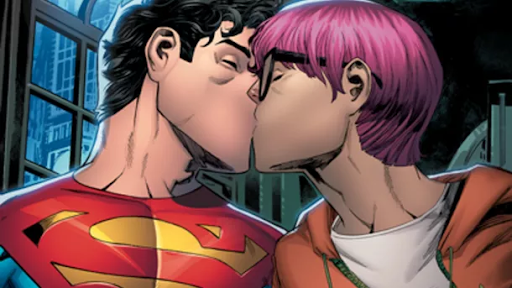 Image courtesy DC Comics via GamesRadar.com.
Now, DC started the year by teasing a future relationship between Jon and Yara Flor, the Wonder Woman of the future. Nine months later, someone's decided that Jon's working both sides of the street. How long this is fated to last, of course, is open to conjecture, based on sales.
There are going to be the haters, who don't like the idea of iconic characters being turned gay or bi. They don't exactly have to be homophobic to express their opinions, but they'll get slapped with the label just the same. DC, Marvel, and other publishers, have employed LGBTQ+ writers & artists for years, though you might not have known.
Thus, the strategy is two-fold. Yes, it's a publicity stunt for sales purposes. It's also a means of expanding Superman's general audience. It's worked for Harley Quinn, for example. Whether or not it works for Jon or Tim is another story altogether.
Posted by hobbyfan at 1:19 PM