On The Shelf: Wonder Woman turns 80

DC Comics has marketed Batman Day the last few years, usually in September. This year, Wonder Woman is being feted with her own Day as the Amazing Amazon marks 80 years. 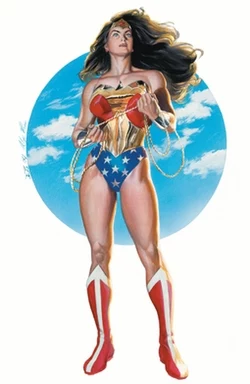 If you can look this good at 80.........!
Image courtesy of DC Comics.
To mark Wonder Woman Day, DC released a trio of 1-shot specials this month.

Wonder Woman Day itself reprints the first issue of the 2016 "Rebirth" era series, in which Etta Candy, one of Wonder Woman's oldest associates in the books, was given a major upgrade from comedy relief to a much more important role as a member of the military. The reprint is out to promote the trade paperback collection of the first story arc.

For the younger readers, a sampler of Diana: Princess of The Amazons offers Diana as a pre-teen on Themyscira, formerly known as Paradise Island. Parents, your daughters will love it. The actual graphic novel, if it isn't already out, will be soon.

Finally, another graphic novel, Tempest Tossed, is sampled, and the OGN itself is also available. Recommended for teens & up.

For those of you waiting for the conclusion of Suicide Squad: Get Joker, you're going to have to wait three months. DC, due to delays involving shipping of selected titles, will have the conclusion in stores in mid-January. Trust me, it's better than what we've been seeing from the regular monthly and the King Shark miniseries, which are leaving me cold lately.