Leslie Charteris' The Saint conquered movies & radio before moving to television in the 60's. The common thread was that Simon Templar, billed on radio as the "Robin Hood of Crime", was a debonair gentleman who worked both sides of the law.

Most of you are probably familiar with the 60's TV incarnation, starring Roger Moore, or even the short-lived follow-up series with Ian Oglivy, Return of The Saint. However, before all that, The Saint appeared in movies, as well as a radio show with Vincent Price as Templar (previously reviewed).

If you found a picture next to the word, "class" in the dictionary in reference to gentlemen, chances are pretty good you'd find one of Price or George Sanders, who played Templar in five films total, including 1940's "The Saint Takes Over".

A police inspector is suspended from the force after being framed for murder involving a race fixing scandal and thousands of dollars. Templar enters the fray to clear the inspector, a frenemy of his...... 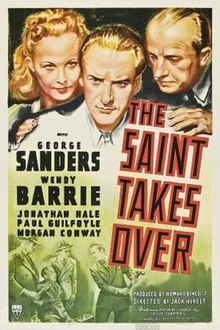 That same whistling was used in the radio dramas, too. I believe the melody may very well be the same as the TV theme song composed by Charteris, and conducted in the 60's by ITC's go-to composer, Edwin Astley.