Washington's original Duchess of Dumb is back in effect.

Kayleigh McEnany, now a Fox Shmooze airhead, tried to shred President Biden's plans to expand the Supreme Court. Problem is, she got shredded herself on social media as users reminded her that the GOPers gamed the system to gain control of the Supreme Court, refusing to confirm current Attorney General Merrick Garland in 2016, then rushing the confirmation of Amy Coney Barrett last year. The GOPers are afraid of losing control of the Court, that's all it is. 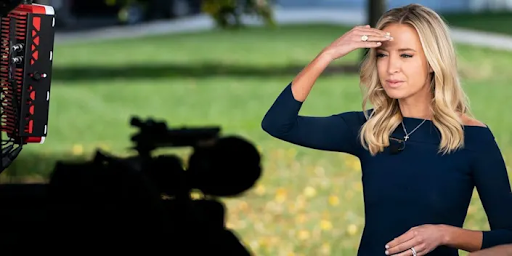 File photo courtesy of Getty Images via Yahoo!
Let's just put the card on the table. Her argument was, dare I say it, Kaylame.
==================================
The NFL is allowing defensive players, particularly linemen, to wear single digits on their uniforms. Tampa Bay Buccaneers QB Tom Brady isn't a fan, but someone should remind Brady that this is a thing in the high school & college games. In high schools, most players are on the field on both offense and defense, and some colleges will assign the same numbers to offensive and defensive players (i.e. Ohio State)
That the 7 time Super Bowl champion isn't digging is a sign he's getting old, isn't it?
==================================
The Senate passed legislation that would serve to thwart the rising tide of anti-Asian hate crimes that have mushroomed over the last year due to the pandemic. The lone dissenter? Missouri moron Josh Hawley, whose excuses couldn't fill a water bucket.
Look, Hee-Hawley, this started because of your hero, President Pampers, a year ago, mocked the pandemic by attaching China to it, rather than actually do something noble and try to stem the tide.
I wouldn't be at all surprised if Hawley winds up facing some sort of unexpected scandal like fellow Washington pretty boy Matt (Swinging) Gaetz before the year is out. He certainly needs to be hoisted on his petard, too.
======================================
We're closing on a sad note.
Greg Jacobs, alias Shock G and Humpty Hump from the 90's rap group Digital Underground, passed away earlier this week at 57. Cause unknown as of press time. As Humpty Hump, Jacobs was the lead vocalist on the group's 1990 debut hit, "The Humpty Dance", which got a ton of airplay on MTV back then.
A year later, "Same Song" was included on the soundtrack to the movie, "Nothing But Trouble", directed by & starring Dan Aykroyd, co-starring Chevy Chase, Demi Moore, & John Candy. Aykroyd appears in the video, in which Jacobs raps as both Shock G and Humpty. Tupac Shakur made one of his first appearances rapping the last verse.
Rest in peace.
Posted by hobbyfan at 7:02 AM