Fox Shmooze has gotten away with calling Tabloid Carlson's nightly garbage hour an "opinion" program to avoid litigation against Carlson.

Unfortunately, to try to call Carlson a comedian would be an insult. To comedians. 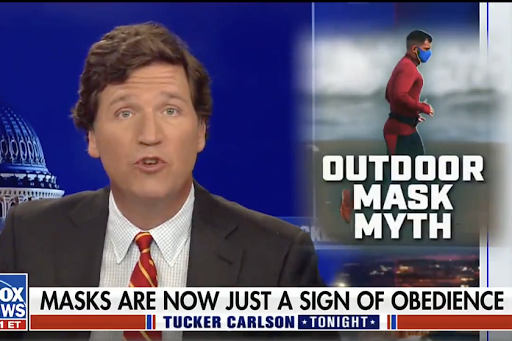 As the screencap above indicates, the silver spooned jackass is encouraging opponents of wearing masks to call the cops on people who are following COVID-19 guidelines, even as those guidelines are changing. In other words, the people who don't want to wear masks and risk their own health are being encouraged to summon the police, just because they're uncomfortable with people obeying the rules and wearing masks.

It's been 13 months, people. COVID is still a thing because morons like Carlson have you snowblind to reality. This pandemic would've been over months ago had more people across the country utilized common sense (something Carlson doesn't remember exists unless it serves his agenda). Even if you've been fully vaccinated, you still wear a mask out of respect and courtesy until the pandemic is finally under control. With idiots like Carlson on the air, making money off stoking fear and distrust from viewers, mostly in the Bible Belt states, and in the suburbs, progress is at a relatively slow pace, not slow enough to fall behind a snail, but still.

The way I look at it, Carlson probably flunked science in school, which explains his ignorance. If he thinks this is a joke, I'd like to see him do stand-up at a comedy club, and see how far he goes before he gets pelted with tomatoes and tossed out.