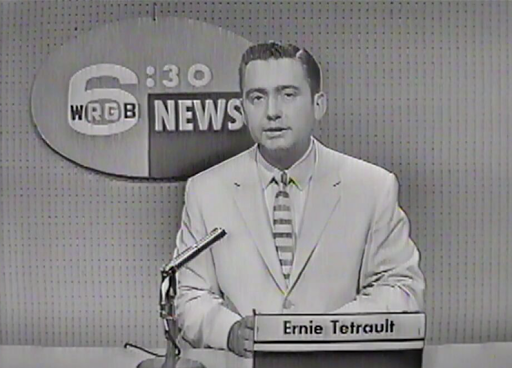 File photo courtesy of WRGB, posted by WAMC.
Tetrault began his career in radio at WTRY, when the station was based in downtown Troy. He moved to WRGB in 1951, initially hosting a localized version of NBC's Today before moving to the anchor desk in the early 70's. He regularly went into the field, as far out as Vietnam and Saudi Arabia. He went undercover on the streets of Albany as a homeless man in 1988 to call attention to the still-growing issue of homelessness in the 518.

Tetrault made a cameo appearance, via a newscast, in the movie, "Sneakers", with Robert Redford and Dan Aykroyd. After retiring in 1993, Tetrault remained a presence in advertising, doing a series of ads for the area's coalition of Ford dealerships, and print ads to promote hearing aids. Two hoirs ago, we learned of his passing at 94 after an illness. Tonight, all of the area's television stations are paying tribute to him.

Earlier today, England said goodbye to Prince Phillip, who had passed away at 99. I'd like to think that Ernie Tetrault was television royalty. Rest in peace.

Truly, Ernie Tetrault was a legend in local broadcasting. To remember a time when your 6:00 p.m. news featured Ernie on WRGB, Ed Dague on WNYT and Dick Wood on WTEN, that's when the news felt important and local and worth watching.

And, there was a time when Ed & Ernie shared the desk on WRGB, before Ed left for WNYT.

When you were on Answers Please, Chuck, did you ever get the chance to meet Ernie?