Weasel of The Week: Mike Lindell

We're just learning now that MyPillow CEO Mike Lindell is fighting back against at $1.3 billion dollar defamation suit filed against him by Dominion Voting Systems. Problem is, he's risking his company's future by filing a counter-suit for $1.6 billion against Dominion. 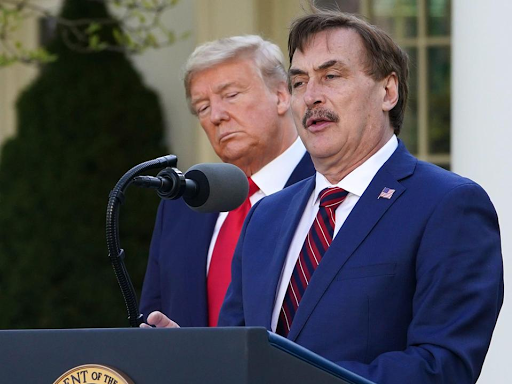 File photo courtesy of Getty Images via Yahoo!
The counter-suit is being filed by MyPillow, trying to separate the company from its founder and CEO. They say when Lindell parroted false claims about election fraud after the 2020 Presidential election, he was speaking for himself, not the company.

Well, DUH! The last I checked, Dominion targeted Lindell himself, along with ambulance chasing dingbats Rudy Goofiani and Silly Sidney Powell. They were not, insofar as I know, naming MyPillow as a defendant.

Lindell is whining and crying because several retailers, including Bed, Bath, & Beyond and most recently Costco, pulled his overpriced pillows from their shelves. Guilt by association, you know. I remember walking through Walmart one day and seeing the pillows ticketed for $40 a pop, or double the price of lesser brands like Mainstays, a brand familiar to Walmart customers. Haven't seen them much since, and, mind you, this was before 2020.

Lindell is supposedly launching his own social media platform, Frank, later this week, but his actions could have an adverse affect on the success, if any, of his new venture. He wants it to be more of a G-rated platform by banning pornography and coarse language. All well and good, but it will be for naught if he insists on continuing this fool's crusade he's been on.

Dominion lawyers have already said that MyPillow's action is meant to distract attention from their litigation against Lindell.

What Lindell and MyPillow fail to understand is that Lindell, following in lockstep behind Donald Trump, has irrevocably destroyed his reputation, and the counter-suit earns him a set of Weasel ears this week.

And as for the suit? Pass the Sominex.