A Cincinnati bar owner has decided to stop showing NBA games on his TV's until Lakers star and Ohio native LeBron James is expelled from the league because of James' comments, since deleted after Columbus police killed a 16 year old African American girl earlier this week. Granted, the woman was threatening two other people with a knife, but with this taking place mere hours before Derek Chauvin was convicted of murder in Minneapolis, the timing of this incident couldn't have been worse.

Jay Linneman feels athletes should just play and stay away from politics. Kinda hard to do when you have white police officers repeatedly cutting down African Americans, regardless of whether or not they're armed, and since the NBA is a predominantly African American league, well.......!
==========================================
Congressman Ron Johnson put his foot in his mouth again this week when he made some disparaging remarks regarding COVID-19 vaccines. Granted, the Food & Drug Administration (FDA) has reinstated the 1-dose vaccine made by Johnson & Johnson after a 10 day pause following reports of some patients developing blood clots, but Johnson's pea-brained remarks only stand to remind us of how some GOPers intentionally keep their heads in the sand.
Or, as a philosopher named Carnac might've said, Mr. Johnson, may your shower be filled with baby oil.
===========================================
Congress' resident Dumb Dora, Marjorie Taylor-Greene of Georgia, boasted online about reading all 15 pages of the New Green Deal proposal championed by NY's Alexandria Ocasio-Cortez, and has agreed to a debate. That was fine, but she crossed the line, as usual, by implying that AOC would be branded as "a scared little girl" if she didn't show up.
Farron Cousins, in discussing this on one of his channels earlier this week, likened Peaches for Brains' comments to a wrestling promo.
I can picture it. MTG as Charlotte Flair. AOC, or, Alex From The Block, as NXT champion Raquel Gonzalez. Any way you slice it, Taylor-Greene just made a fatal mistake. She obviously hasn't paid attention to AOC shredding other GOPers (you can check it on YouTube) the last couple of years. There's only one way to describe it, via "Forrest Gump":
"Stupid is as stupid does".
============================================
Tabloid Carlson was at it again on Friday. 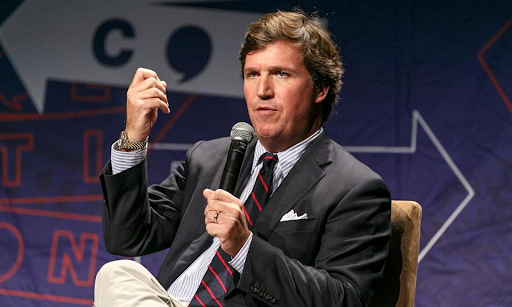 Tabloid called real journalists "cowards". Which is funny coming from a silver spooned jackass whose Fox Shmooze garbage hour is all about opinions and tall tales that would make Pinocchio blush.
I would not say it's the pot calling the kettle black. That would be an insult to pots and kettles.
Posted by hobbyfan at 6:51 PM