Former NY Liberty star Becky Hammon made history when she became the first female assistant coach in the NBA, a job she still holds today with the San Antonio Spurs. She even took over the team after Gregg Popovich was ejected in a game some time back. 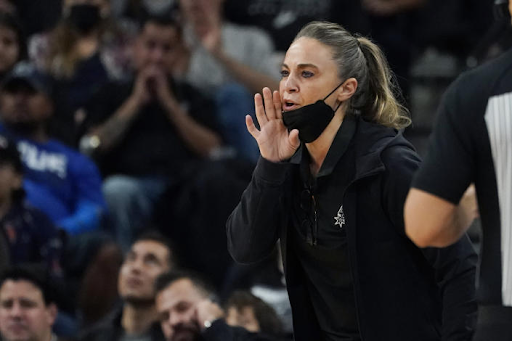 Now, she gets to run her own team.

Hammon was hired to coach the Las Vegas Aces, which brings her back to the WNBA. The Aces are co-owned by Mark Davis, owner of the NFL's Las Vegas Raiders, whose eye for talent isn't like that of his late father, Al, who founded the Raiders more than 60 years ago.

Meanwhile, Australian national team coach Sandy Brondello has been hired to coach Hammon's old team, the Liberty. Brondello's previous WNBA gig was coaching the Phoenix Mercury a ways back. Good thing the Liberty are no longer under the thumb of NY's biggest man-child, now that a certain bloviator moved south, James Dolan, who sold the Liberty a couple of years back.
========================================
One account down, one to go.
Georgia Misrepresentative Empty-G (Marjorie Taylor Greene) had her personal account banished by Twitter. However, she still has her "official", or, work account, but, given how she has refused to stop spreading misinformation about COVID, don't expect that account to last too much longer. Five strikes will get you bounced, and while I'm not sure about this, she might already have a strike on her work account.
Greene also was deducted less than half her 2021 salary in fines for spreading said misinformation and other lies. She's up for re-election in November, so she might not be long for Washington anyway.
========================================
Two weeks ago, WWE pulled Universal champion Roman Reigns, manager Paul Heyman, and others from the road due to COVID concerns. It's not that everyone who was scratched had contracted COVID, but the company was being pro-active and taking precautions to protect the main event at last night's Day 1 event.
Unfortunately, those precautions weren't enough. Reigns (Joseph Anoia) was scratched from the event, and his scheduled challenger, Brock Lesnar, was shifted to the WWE title match, turning that into a 5-way scramble, and lessening the chances of Big E holding the title at the end of the night.
Sure enough, Lesnar won the title, which begs to ask whether or not that was the original plan for the Universal title. Reigns revealed Saturday morning he had tested positive for COVID. His former partner, Seth Rollins (Colby Lopez), had contracted COVID two weeks earlier, and was cleared for last night. Given the increasing frequency of Lesnar's appearances of late, and his "free agent" status, he might actually work a TV match or two before the Royal Rumble, set for January 29.
That brings up another point. Seeing as how AEW scheduled some of their early PPV's on Saturdays, WWE has decided that their Peacock/PPV events will also be on Saturdays going forward (Wrestlemania, in April, is 2 nights for the 3rd consecutive year). Hmmmmm.
=========================================
Most of us remember Wayne Allyn Root as a TV tout for football back in the day, appearing in infomercials on cable. He also took out ad space in newspapers in New York.
Today, Root is a conservative gasbag who has gone so far as to suggest former president Donald Trump needs an "intervention" after Trump shocked his base a couple of weeks back and touted vaccines as safe, but is still opposed to vaccine mandates, feeling it is a personal choice.
At least Trump has figured out that, after his own experience with COVID more than a year ago, health is still a priority. Root forgot a long time ago what truth is.
========================================
Are you mourning the loss of NBC Sports Network? The channel ended its run at 2021 became 2022 on Friday night, and sports programming on the channel, such as Premier League soccer, is now on USA Network. This decision could come back to bite NBC-Universal down the line.
Posted by hobbyfan at 1:08 PM