To follow up on what we wrote earlier this week regarding Antonio Brown, Tampa Bay formally, finally cut bait on the problem-plagued receiver on Thursday. Coach Bruce Arians now claims Brown never said anything about being injured leading to his farewell tantrum vs. the Jests on Sunday.

If anything, Brown has already said he doesn't need psychiatric help. The denial only convinces this desk that he does, if only to explain some of his behavior patterns in recent years.
=======================================
According to recent reports, WarnerMedia & ViacomCBS, co-owners of the CW Network, are exploring the prospects of selling off the network, perhaps feeling tired of CW being "the comic book network", with Riverdale and several DC Comics series on their roster, the latest of which, Naomi, debuts on January 11. Fans are already speculating that if the sale goes through, Naomi, Superman & Lois, The Flash, Legends of Tomorrow, & Batwoman would join Titans, Doom Patrol, and the animated Young Justice on HBO Max.
That all depends on who would acquire the network. One or the other of the owners could take full possession, and if that's the case, WarnerMedia would probably have more of a vested interest. Stay tuned.
===========================================
Proving once again that, in the words of comedian Ron White, "you can't fix stupid", Misrepresentatives Empty-G and DoorMatt Gaetz said they planned on retracing the steps of the "patriots" who walked from the White House to the Capitol one year ago. 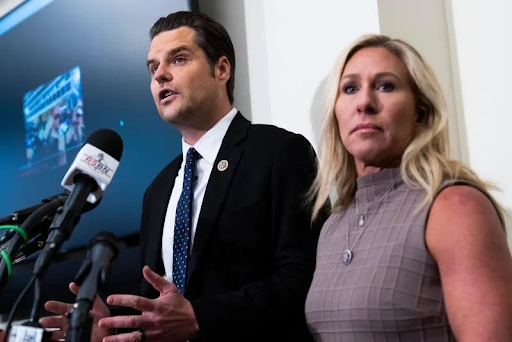 Between the two of them, they only have an IQ of 10.
They claim to be proud of what happened last year, which suggests that, per Weird Al Yankovic, "can't nothing bring me shame" ("Tacky", 2014).
Farron Cousins offers his take:
Empty-G has won Dunce Caps on back-to-back weeks. She has started tweeting on her work account more of the same garbage that prompted Twitter to terminate her personal account. Told you that would happen. She thus gets, along with Gaetz, another set of Weasel ears.
=============================================
After President Biden shredded Citizen Pampers, without saying his name, on Thursday, Pampers, through his press flack, Liz Harrington, whined, and lied some more. Same old BS, different day. He was talked out of doing a rebuttal-type speech at Mar-a-Lago, opting instead to do a rally in Arizona next week. I've got a better idea. Submit to a lie detector test, Dumb Donald, and watch the detector explode.
===============================================
Comic book fans can be as passionate as anyone. Unfortunately, they sometimes take it to extremes that give the industry a black eye or two.
We've told you previously about how DC had decided that Jonathan Kent, the son of Superman & Lois Lane, was repackaged as being bi-sexual in his new solo series, Superman: Son of Kal-El. Superman purists are not having it, it appears, and have let writer Tom Taylor, one of the hottest writers in the industry, know about it in some very crude terms.
Nearly 30 years after her debut on Batman: The Animated Series, Harley Quinn became a LGBTQ+ icon, and no matter where she appears, in comics or in her HBO Max series, fans expect her and her BFF-turned-partner, Poison Ivy, to remain a super-couple.
In Harley's current series, writer Stephanie Phillips decided to split Harley & Ivy up pro tempore, likely with a plan to bring them back together again at a later time. We've seen that happen on TV already. However, certain fans aren't digging that, either, and have flooded Phillips' social media accounts with death threats because they don't understand the long-term planning of comics storylines.
A writer on Reddit offered that Phillips & Taylor are getting their assignments from the editorial department at DC, which, in turn, is getting its instructions from marketing reps at WarnerMedia. Taylor, to his credit, has stepped up to the plate on his fellow writer's behalf.
Consider this for a minute. WarnerMedia is on the Harley-Ivy train. As with any relationship, real or fictional, couples do have their ups & downs. Ye scribe has been there. My advice to these "fans" is to be patient. Harley & Ivy will be back together in print soon enough.
Posted by hobbyfan at 3:44 PM

Labels: Essay, News, NFL, On the Air, Weasel of the Week