A collection of Dunce Caps & weasel ears to hand out in the wake of "Super Wild Card Weekend".

Weasel #1: Walt Anderson. The former ref, now director of officiating after Alberto Riveron retired, decided to cover for his fellow zebras after the now infamous botched whistle on Saturday during Raiders-Bengals. They knew they made a mistake, but let the game continue. Game ref Jerome Bogner, a respected official in his own right, now will be sidelined for the rest of the season. Problem is, he's getting thrown under the bus so the league can cover its corporate tuchis.

Weasel #2: Tom Brady. For the 2nd straight week, Brady refused to come out of the game with Tampa Bay well in front. We get he's a competitor, but he also has a giant-sized ego. Bucs coach Bruce Arians, who struck another Bucs player in the helmet for a bonehead play, wanted to pull Brady to protect him from possible injury. Last week, Brady stayed in the game so that his pea-brained buddy, Rob Gronkowski, could earn an incentive bonus on his contract. This time, in Sunday's game against Philadelphia, Brady fed his ego, even with Tampa up by 2 scores late in the 4th quarter.

For what it's worth, Brady's selfishness will come back to bite him if the Rams' Aaron Donald gets to him.

Dunce Cap #1: Bill Belichick. You can argue that New England getting blown out by Buffalo on Saturday was a teachable moment for rookie QB Mac Jones. However, Belichick left Jones in the game in the 4th quarter, with the game already decided, instead of pulling him for Brian Hoyer. In all honesty, you don't want your new franchise QB to end the season traumatized, but that's what Belichick, who knows better, did.

Dunce Cap #2/Weasel #3: Dak Prescott. The Dallas QB/Sleep Number salesman pulled the mother of all bonehead plays at the end of Sunday's loss to San Francisco. You know what happened by now. Prescott scrambled for 17 yards with under a minute left. Out of timeouts, Prescott tried to rush his team to the line of scrimmage for the next play, but time expired.

Worse, in his post-game presser, Prescott really got unhinged, saying the fans were justified in throwing debris at the game officials. 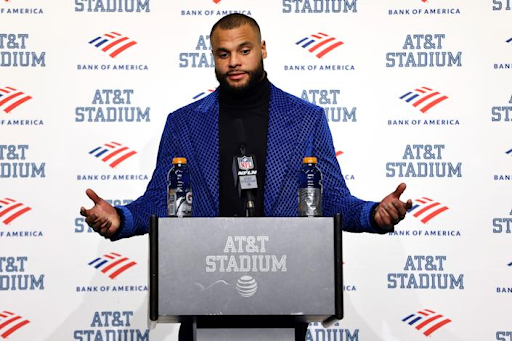 Photo courtesy of Yahoo!.
Justified? What are you, a Republican all of a sudden, Dak?

The inebriated idiots in Arlington were frustrated, that's understandable, but it is out of character for the Cowboy organization to have an incident like that. At the same time, Prescott's stupidity took some shine off offensive coordinator Kellen Moore's chances of landing a head coach's job for next season.

Weasel #4: Stephen A. Smith. This should not shock anyone who is familiar with Smith's schtick on First Take. With ex-Cowboy Michael Irvin across the table on Monday, Smith had a few laughs at the expense of the Cowboys over this latest debacle. Like, I wouldn't have blamed Irvin, who still has his NFL Network gig, oh, by the way, if he reached over and smacked Screamin' A. Cosell upside the head for being the national jerk that he is. It would've cost Irvin his seat, sure, but Smith knows nothing about respect.