How a Hall of Fame career falls apart-----again

Mention the name "Touchdown" Eddie Brown to fans of the Albany Firebirds in the 90's, and you hear a lot of praise. Brown and the 'Birds left town after winning the 1999 ArenaBowl, but to many, Brown remained an area legend.

Sadly, the same cannot be said for his son, Antonio, who quit on the Tampa Bay Buccaneers Sunday while the Super Bowl champions were trailing the Jests in the 3rd quarter at MetLife Stadium.

Bucs coach Bruce Arians knew what he was getting into by bringing Antonio Brown to Tampa Bay last season on the recommendation of QB Tom Brady, who was a teammate of Brown's for all of 2 weeks in New England a couple of years earlier. Arians had been an assistant in Pittsburgh when Brown broke into the league. In the space of the last four years, Brown has now burned his bridges with four teams---Tampa, Pittsburgh, New England, and the then-Oakland Raiders. 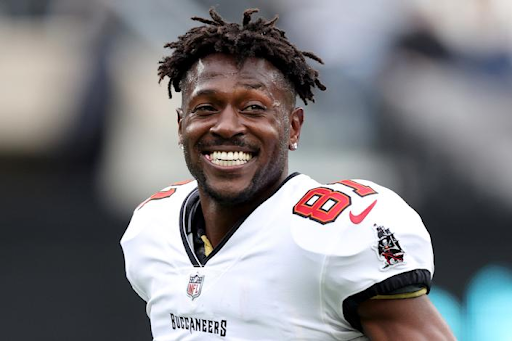 So what happened to prompt this latest escapade?

Brown's been nursing an ankle injury, and he'd been back with the Bucs for just the second game after a league-enforced suspension for faking a COVID vaccination card. He told Arians and his assistants the ankle was bothering him to the point where he could not re-enter the game with Tampa down by two scores in a game where they'd eventually overcome the deficit---It was the Jests, after all---and win, 28-24. Arians then decided that Brown was no longer wanted.

You know what happened next. Brown shed his jersey, gloves, & shoulder pads, walked off the field, pausing only to do some junping jacks before exiting the tunnel, and waiting for a ride as the game continued without him. In effect, Brown put himself ahead of the team, and effectively quit.

Brown is part of today's diva culture with skill position players in football. Accustomed as he was to being the #1 receiver, he'd been supplanted in Pittsburgh by Ju-Ju Smith-Schuster. That he played one game in New England was a miracle. In Tampa, he couldn't be #1, not with Mike Evans already established as the Bucs' top receiver. And, then, of course, you had OJ Howard and a certain lunkhead better known now for playing a dork in a series of ads for a certain insurance company. Brady vouched for him in New England and in Tampa, and has been burned twice.

Brady, in a post-game presser, said that Brown needs compassion instead of scorn, as well as psychiatric help to solve his issues. The media is sure that he has played his last game. In this writer's opinion, there's only one team left that would tolerate his prima donna act. Maybe.

That would be Baltimore, where Antonio's cousin, Marquise, aka Hollywood, is their star receiver. You could picture the damage the cousins could do together, especially if Marquise can reach out to Antonio in a way no one else can. Family, you know.

Eddie Brown was the star attraction here in town when the Firebirds were here, and he gave back to the community. I'd imagine his heart is broken seeing Antonio became the next Terrell Owens. For all the wrong reasons.

Will Antonio be in Canton? At this juncture, no, and he only has himself to blame.