Once upon a time, John Stockton was a respected point guard for the NBA's Utah Jazz.

Over the weekend, the perception of a post-career Stockton, now a season ticket holder at Gonzaga University, changed, and not in a good way.

Stockton, you see, has become an anti-vaccine conspiracy theorist, claiming without evidence that "over 100 pro athletes" have died from COVID vaccines, some during games, he claims. Administration at Gonzaga wasn't having it, and suspended Stockton's season tickets, largely because of his refusal to wear a mask at games. There's something in the waters that changes people's perceptions, leading to embarrassing scenarios such as this. Not good.
=========================================
There was a high school basketball game in Arizona the other night where the final score was 76-0, and the winning team didn't attempt a field goal in the 4th quarter. The coach pulled his starters after the 1st quarter after taking a 35-0 lead. We've seen a lot of lopsided scores this season here in the 518, as documented over at Tri-City SportsBeat, but all it does is expose the disparities in talent in each of the leagues in Section II, as well as across the country.
=========================================
Form didn't hold in the NFL Divisional Playoffs over the weekend, not until the last game of the weekend.
Both #1 seeds, Tennessee in the AFC and Green Bay in the NFC, were eliminated Saturday night, both on walk-off field goals with 3-4 seconds left on the clock. Cincinnati continued its Cinderella run as Evan McPherson, a rookie kicker, booted the Titans out of the tournament.
In Green Bay, Aaron Rodgers and the Packers saw their season end on the frozen tundra for the 2nd straight season, but this time in the divisional round. San Francisco's Robbie Gould, an old Packer nemesis from his days in Chicago, hit the game winner to lift the 49ers into the NFC title game next Sunday night. Already, there is speculation that this might've been Rodgers' last game in Green Bay. At least he still gets to be a clown shilling for State Farm.
San Francisco collected a slice of revenge after losing to the Packers back in September.
On Sunday, the defending champions, the Tampa Bay Buccaneers, the #2 seed in the NFC, sought to avenge an early season loss to Los Angeles. In the 2nd half, the defense kept creating opportunities for Tom Brady to rescue the Bucs, but he left too much time for the Rams and Matthew Stafford, who hit Cooper Kupp with a deep pass that put the Rams in position for Matt Gay, an ex-Bucs kicker, to deny Brady another opportunity at the Super Bowl. Unlike Dallas' Dak Prescott a week earlier, Stafford had time to clock the ball before the game winning kick.
That means the Rams, the #3 seed, will host San Francisco as the teams will meet for the 3rd time this season. The 49ers swept the regular season series, having done so in three consecutive seasons.
The game everyone wanted to see was the highlight of the week, as Kansas City hosted Buffalo, seeking to avenge an October loss to the Bills. After a first half dominated by defense, the two teams lit up the scoreboard in the second half, specifically in the 4th quarter. Like, this was insane.
Adding to the insanity was an inebriated Kansas City fan who ran onto the field during a CBS commercial break, only to get drilled by Buffalo's Stefan Diggs before security could shut him down. 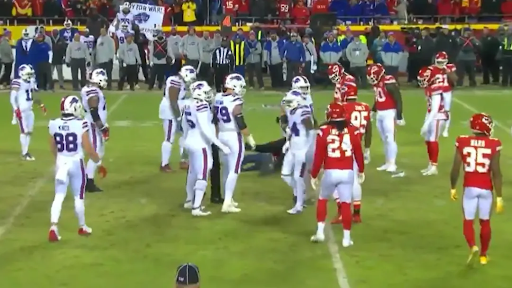 CBS came out of the break to see the guard plant the goof, screened out of the viewers' vision by players from both teams. Ironically, the geek was wearing a replica Travis Kelce jersey, and Kelce caught the game winning touchdown pass from Patrick Mahomes in overtime to send the Chiefs to the AFC title game for the 4th straight season, 42-36.
That, of course, has fans complaining on social media that Buffalo never got to go on offense in overtime, and that particular clause in the overtime rules, both regular season and postseason, needs to change, but the league won't.
Kansas City will host Cincinnati on Sunday afternoon.
Posted by hobbyfan at 6:47 AM