Of hypcrites and deviants

Study the face of the man in the picture below. 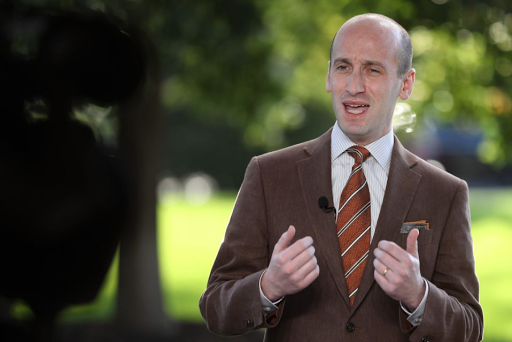 Stephen Miller is the jackass who advised Donald Trump on his immigration policies, which tore apart hundreds of families. Children were being left in cages while their parents were sent back to Mexico, and now the government, under President Biden, is having trouble locating those missing parents.

Now, Miller goes on Fox Shmooze and whines that Biden's the one who's being cruel and inhumane. Wrong again, dirtbag. All he & Fox Shmooze are doing is inciting the Legion of The Brainwashed all over again.

All this proves is that GOPers will whine and complain about anything the Democrats are doing while trying to pretend to be innocent as the driven snow. Only as long as the "driven snow" is cocaine, right?

And speaking of America's Oldest Baby, some morons brought a papier mache statue of Trump, with his face painted gold instead of, as some people perceive him, orange, for the CPAC conference which ends today. We have read and heard numerous articles redefining the GOP as a cult worshiping Trump as if he was, oh, I don't know, Jim Jones or David Koresh?

And Trump claims to be a Christian? Go back and read the book of Exodus, jackass.
=====================================
Maybe Governor Cuomo should never have split with Food Network personality Sandra Lee a couple of years back.
In recent days, a pair of former members of Cuomo's staff have come forward alleging sexual harassment. In the most recent case to come to light, courtesy of the New York Times, the claimant interpreted some innocent questions posed by Cuomo as unwanted advances. I'm guessing he was asking for advice, probably after he broke up with Lee. Cuomo defended himself, stating it was not his intention to make the aide uncomfortable. We'll see how this plays out, but I shan't be surprised if the NY tabloids are already making with "Randy Andy" headlines, in comparison to England's Prince Andrew. Alexandria Ocasio-Cortez is already calling for Cuomo to resign. You'll recall that just a few years ago, Eliot Spitzer was forced out due to similar, if not lewder allegations.
If anything, this would kill Cuomo's chances of running for President dead, at least for now, and, all of a sudden, the man who was portrayed as a white knight to New Yorkers in the early months of the pandemic, in opposition to Trump, has had some paint wiped off his armor.
And I'll bet anything at all Trump is having a few laughs about this at Mar-a-Lago.
Posted by hobbyfan at 8:08 AM