Marvel Comics leaned heavily into the classic Universal monsters in forming a line of all-new horror titles in the 70's. One of their own creations, Ghost Rider, had the longest run, at 81 issues, up until its cancellation in 1982, and this doesn't include his appearances in Marvel Spotlight (1st series), which also was an incubator for Werewolf by Night (45 issues in its own series).

The critically acclaimed Tomb of Dracula produced 70 issues up until it was cancelled in 1980, replaced by a short-lived black & white magazine that, without Comics Code inhibitions, allowed the late Gene Colan, the series artist, to take the series into "R"-rated territory.

Unfortunately, Monster of Frankenstein, later rechristened The Frankenstein Monster, got the Rodney Dangerfield treatment. Just 18 issues between 1973-5, plus 7 issues of Monsters Unleashed, a black & white magazine (issues 2, 4, 6-10). Despite some solid storytelling by writers Mike Friedrich and Doug Moench, the latter moving over with artist Val Mayerik from Unleashed, the series lost its way after Dracula paid a visit in issues 7-8. Artist Mike Ploog, who also helped develop Ghost Rider and did some solid work on Man-Thing, left Frankenstein after 6 issues, replaced by John Buscema, Bob Brown, and Mayerik.

A Marvel Epic Collection trade paperback collects all 18 issues, plus the Unleashed serial, and a meeting with Spider-Man in Marvel Team-Up (1st series), leaving off appearances in The Avengers and a cloned version of the monster meeting The Invaders. Having acquired most issues second hand back in the 80's, the memories came rushing back. Oh, this was some good reading.

Rating: A.
==============================
Our final analysis of the new Werewolf by Night leaves us pretty cold. Written by Taboo of the Black Eyed Peas, our Native American lycanthrope gets mixed up with a wacked out genetic scientist, and the door is open for a sequel, pending final sales figures. I would've preferred the new wolf meeting Jack Russell, the protagonist in the original series, but that's just me.
Final rating: B-.
=================================
Gene Luen Yang's treatment of Shang-Chi has him with a family that didn't exist in his original run in the 70's & 80's. Alternatively known as Brother Hand as part of a clan, and no longer a lone wolf adventurer, Shang will return in a follow-up miniseries later this year.
Meanwhile, The Legend of Shang-Chi, a 1-shot with no ties to the miniseries, hews closer to the old days as Shang battles an old X-Men nemesis, Lady Deathstrike. About what you'd expect, except that this wasn't written by Yang, who's still working mostly for DC.
Rating for the 1-shot: B-. Miniseries final rating: B-.
==================================
DC gathered together some reprints from the Golden, Silver, & Bronze Ages for DC's Greatest Detective Stories Ever Told, but it's a mixed bag of elements, some of which don't belong.
After opening with Golden Age tales of Slam Bradley and The Sandman, the latter of which has been reprinted a few times since the 70's, we have a Elongated Man short from the 60's which wasn't worth writing home about. 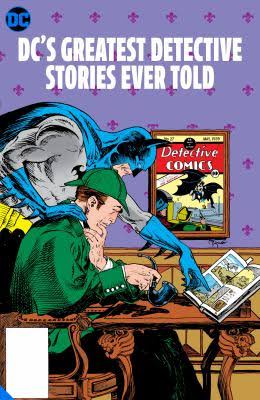 Where the book slips is inserting a "origin" story for Detective Chimp, currently part of Justice League Dark, but this short was done for laughs in the 2nd series of Secret Origins around 1990 or so. The cover image of The Batman and Sherlock Holmes, by the great Mike Kaluta, comes from Holmes' appearance in Detective Comics in the late 80's, in which Batman, Elongated Man, & Robin (Jason Todd) travel to England on a case. The 3rd Robin, Tim Drake, gets his initiation in a chapter of the Lonely Place of Dying arc that crossed between Detective, Batman, & New Titans, and for this reason, the ending of this final tale is edited off. Shouldn't have bothered if you had to do that, when there were better stories to be had.
Rating: B-.
Posted by hobbyfan at 11:03 AM