Senate Majority Leader Mitch McConnell is taking a page from President Trump's playbook by trying to mislead his constituents in Kentucky. 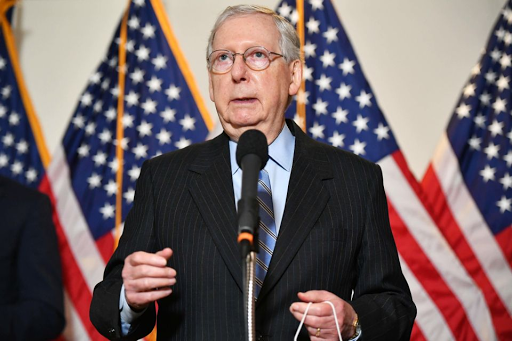 There's been sniping on both sides, really, after McConnell claimed that his Democratic opponent, Amy McGrath, isn't willing to debate him. In reality (unsurprisingly), Senator Pruneface is the one who's resisting. He doesn't want a female moderator overseeing the debate between him and Ms. McGrath.
There have been debates where there's not just a moderator, but also a panel of reporters and pundits, which wasn't the case last night in Cleveland (more on that shortly) when Trump debated Joe Biden. For some reason, Senator Pruneface thinks that a female moderator---say, for example, Katie Couric, Robin Roberts (Good Morning, America), or even Oprah Winfrey (!)---would be slanted against him. That's not how it works, and he knows it. Bear in mind, this yokel beat actress Ashley Judd to start his Senate career several years ago.
McConnell is due to fall, and hard.
Meanwhile, in Cleveland, the first Presidential debate was anything but civil, which would make the likes of Richard Nixon, Ronald Reagan, and John F. Kennedy turn over in their graves.
President Trump squandered another chance to redeem himself before the American people, opting instead to stick to his strategy of lying, bullying, and avoiding truth as much as possible, such that the organizers are planning on making changes ahead of the next debate on October 15. By comparison, the Vice Presidential debate between Mike Pence and Kamala Harris should be more on the order of a traditional debate. If the goal was trying to make Biden look bad, Trump didn't exactly succeed. Moderator Chris Wallace of Fox News lost control of the debate fairly quickly because the Oldest Spoiled Brat in America flat out refused to be civil, pushing oft-debunked lies instead of confronting facts, refusing to denounce white supremacist groups like the Proud Boys, instead advising them to "stand back & stand by", which was quickly marketed by the group.
In order to avoid more of the same on October 15, expect Trump to have his mic cut off if he can't rein himself in. All of America is watching him implode, and he only has himself to blame.
Posted by hobbyfan at 6:07 PM

As I've said before, I don't see how anyone could be undecided at this point. Anyone who'd vote for Donald Trump after what he's done to this country and it's people is either sadistic or insane!

Dude is not a president, he's a cult leader. The question that all of these "non-racist" Trump supporters need to ask themselves is this: If all of these Neo-Nazis, white nationalists and Klan-like organizations share your political views, what does that say about you?

The question I have for these folks is, did you leave your brains at the door?