George Schlatter thought his career had been reborn after Real People became a hit for NBC. However, a 2nd series in the same vein as People proved him wrong.
Speak Up America had a pair of pilot specials in the first half of 1980, which led to a short-lived series that fall, airing on Friday nights. Evangelist-turned-actor Marjoe Gortner and Jayne Kennedy (ex-The NFL Today) were the headliners, joined by comedienne-actress Rhonda Bates (ex-Blansky's Beauties, Rollergirls). Gortner upset critics with his fire & brimstone approach to things, and the network had promised to tone things down. Promise broken within minutes into the series opener.
The competition on Fridays didn't help. Speak Up had to deal with CBS' powerhouse lineup, and I think Incredible Hulk or Dukes of Hazzard filled the 9 pm (ET) hour on Fridays for CBS. Game over. 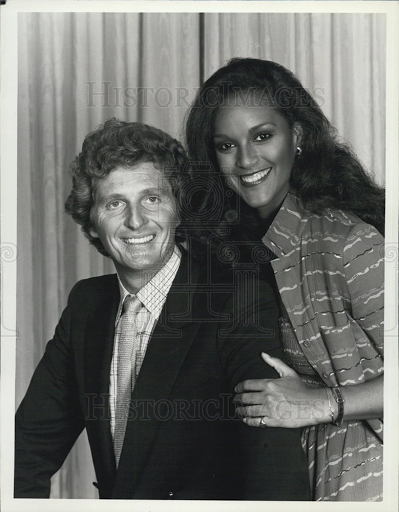 Unfortunately, no actual series footage exists. My folks were into Hulk and Dukes, so, no rating.

Just looking at my copy of Your Mother's Not A Virgin!, the 700+ page memoir of John Barbour, whom you've mentioned here a time or two.
Even for an autobiography, Barbour's book is self-serving to an incredible degree; none of the things that went wrong in his career (and there were a gang of those over the years) were ever his fault.
According to Barbour, he and he alone was the creator of Real People; George Schlatter, who became his producing partner on the show, gradually stole control of the production and ultimately maneuvered him out of the show altogether.
Barbour was also less than fond of Sarah Purcell, whom he accuses of going on a major ego trip once the show caught on; Byron Allen, whom he says was forced on him despite having no talent (Barbour's words, not mine); and Fred Silverman, whom Barbour claims ruined Real People by trying to clone it - first with Real Kids (which you've got on the other site), and then with Speak Up, America.
The whole story is way more complicated than this; Barbour goes into all the details (and are there ever a bunch of those) in his book.
As I said above, more than 700 pages (the Schlatter Saga, which includes all of this, takes up slightly less than 100 pages here), and the self-pity can become wearying at times, but the whole thing is actually sort of entertaining (emphasize sort of).
What can I tell you - I have a low bar ...

Small wonder Barbour fell off the face of the earth after Real People ended. Bill Rafferty took up hosting game shows. Byron Allen is now a producer. And whatever happened to Sarah?