Due to Hurricane Ida last week, the New Orleans Saints have had to move their season opener on September 12 to Jacksonville. They'll host the Arizona Cardinals that day. It's not the first time the Saints have been displaced from their home, as they also did when Hurricane Katrina struck in 2005. They're expecting to return to the Superdome in October.
========================================
Mets acting GM Zack Scott is expected to be in White Plains for a court appearance this morning after being arrested Tuesday on a DWI charge after leaving the home of team owner Steve Cohen. Just another black mark in a series of them for the team in 2021. 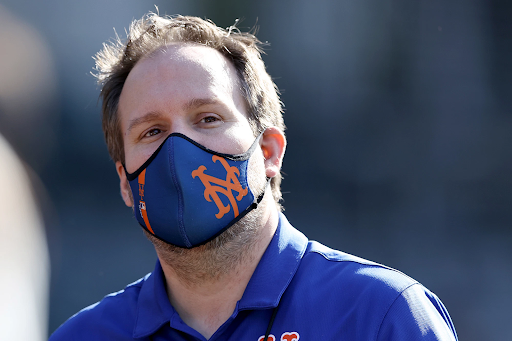 Image courtesy Getty Images/New York Post.
Many fans are calling for a full housecleaning of the team after the season due to their mid-summer collapse which has knocked them to 3rd place in the NL East behind Atlanta & Philadelphia. Expect Scott to not get the full term as GM, but instead shown the door if the Mets don't make the playoffs. Cohen is going to want his own people, and bringing back Sandy Alderson as team president hasn't worked out to the fans' satisfaction.
Update, 3:04 pm (ET): Scott has been placed on administrative leave, effective immediately. Alderson will fill the GM's role until further notice.
========================================
Hall of Famer John Smoltz may be out two jobs.
Smoltz, Fox's #1 baseball analyst, and a studio & game analyst for MLB Network, won't be in the latter's New Jersey studios for a while. MLB and Fox both want their employees vaccinated against COVID-19, and Smoltz, along with Al Leiter, now also working in the Mets front office, hasn't yet taken a vaccine. You'd think that with the high profile gigs he has, he should've done his due diligence already. The last thing Fox wants is to go back to remote broadcasting at this juncture, with the playoffs a month away.
========================================
Vaccine hesitancy may have also hurt the Washington Nationals, but not on the field. Yet.
Bob Boone, the former Phillies catcher and father of Yankees skipper Aaron Boone, resigned as a scout with the Nationals Wednesday due to vaccine issues. Hey, we didn't know he had a scouting job. What we're soon going to see is a lot more personnel moves across MLB and the NFL if team officials, scouts included, don't get with the program.
=========================================
We have heard singers Elton John ("Honky Cat") and Sheryl Crow sing about how change would do us good. Unfortunately, WWE CEO/Chairman/head fossil Vince McMahon is tone deaf.
Still salty about how All Elite Wrestling has bested NXT in the ratings even after the latter moved to Tuesdays from Wednesdays back in April, the 76 year old McMahon decided that NXT would no longer be a haven for independent stars signed by son-in-law Paul "Triple H" Levesque and/or NXT GM and company scout William Regal (Darren Matthews), but rather someplace where new talents are to be molded into what McMahon wants in a WWE superstar.
Starting September 14, NXT will have a new look, as the Capital Wrestling Center, named for the company's original name, back in the 60's, is being renovated. Proving once again that he doesn't believe in leaving anything alone that isn't broken, McMahon and fellow geriatric Bruce Prichard, aka Brother Love, a parody of televangelists from the 80's, will move in as producers, bumping aside Levesque and his staff to handle the main events. The fear, of course, is that NXT, downgraded to a nationally televised developmental brand, will look similar to Raw & Smackdown, and that, even worse, more roster cuts are soon going to be made. The NXT logo has already been revamped, based on an idea by executive producer Kevin Dunn, who likely will also bring his manic style to Tuesdays (i.e. constant camera cuts).
If there was ever a time where a "palace coup" was in order to force McMahon out of the picture, this is it. Where Levesque was a base villain for most of the last two decades, he'd be hailed as a hero now, knowing the old man doesn't have it anymore, but stubbornly is forcing his myopic vision across the board.
In sharp contrast, AEW and owner Tony Khan, whose family also owns the Jacksonville Jaguars, are smart enough to realize that rotating the talent that appears on a weekly basis on their core show, Dynamite, is an approach that works. Khan has surrounded himself with veteran talent that understands what the audience wants to see, and how to build storylines to a crescendo, something that McMahon has forgotten, since so many of his storylines are rushed to a conclusion or are badly written to start with.
My vision has McMahon sharing a suite with his good friend, Donald Trump. Let's just say that suite is at the Bellevue Hilton, and leave it go at that. I'm sure you'll get it.
Posted by hobbyfan at 11:15 AM