USC dismissed head football coach Clay Helton earlier today, less than 48 hours after losing to state rival Stanford. Some are probably wondering why they kept him around to start the season in the first place, if there were issues last year. I may be wrong about this, but this may be the fastest firing in-season in school history.
======================================
Lost in the hoopla of the Yankees' comeback win over the Mets on Saturday were allegations that the Bombers were uncharacteristically using whistling to relay to their hitters that Mets starter Taijuan Walker might be tipping his pitches.
Walker gave up 5 runs in the second inning, but shut the Yanks down after that, lifted after six innings. The Mets fought back to take a brief lead late before Aaron Judge won it with his second homer of the game off reliever Trevor May.
Last night, the Mets' Francisco Lindor, while admitting he wasn't sure that there was any funny business, took matters into his own hands, slamming three homers of his own to lift the Mets to a 7-6 win. The Mets won the season series between the two teams, 4-2, winning two games at each park.
It's going to be interesting next year.
========================================
The San Francisco 49ers lost running back Raheem Mostert to a chipped knee cartilage in Sunday's win over Detroit. Unfortunately, the reality of the injury was lost on a bunch of racist fans who bombarded Mostert's wife, Devon, with some nasty messages on social media. 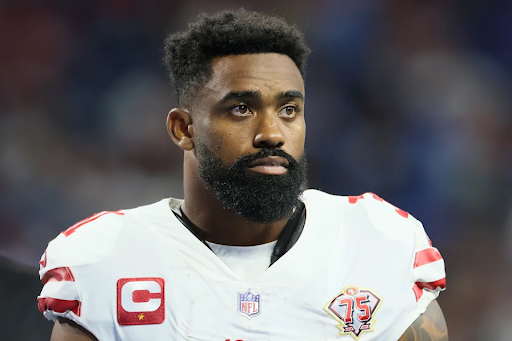 Photo courtesy Getty Images/Yahoo!.
I just don't get it.
==========================================
The Niners used both Jimmy Garoppolo and rookie Trey Lance at QB vs. Detroit, spoiling Jared Goff's debut with the Lions. Similarly, the Chicago Bears alternated between veteran Andy Dalton and rookie Justin Fields. The difference? San Francisco won. Chicago lost to the Rams.
Three other rookie quarterbacks lost their debuts. Trevor Lawrence (Jacksonville), Mac Jones (New England), & Zach Wilson (Jets) gave their fans something to think about in defeat.
==========================================
I find it amusing that on Reddit, Mets fans just hate when the team appears on ESPN. Doesn't matter what night of the week. Mets fans believe the network is biased against the Amazin's, and will make up excuses to justify their haterizing. Of course, they absolutely hate Alex Rodriguez, who was also on Fox's pregame on Saturday, because he's employed by MLB despite his career-shortening suspension for PED's while with the Yankees. They feel he's biased because his bid to buy the Mets fell short last off-season.
I think most of these people spend their days on talk radio because it appears they don't have anything better to do. Like working.
Posted by hobbyfan at 8:49 PM