By now, I'm sure you've heard that former boxing champion Evander Holyfield is set to come out of retirement Saturday to fight MMA star Viktor Belfort in Florida. It's a PPV bout that will cost you $50. Just make sure you get the actual fight coverage and not some lame alternate take on the bout.

Um, yeah, and it involves this guy: 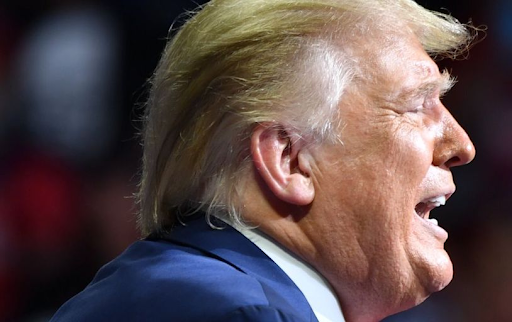 On the 20th anniversary of 9/11, Donald Trump, Sr. & Jr., not exactly experts in boxing or MMA, but fans of both, will be providing "alternate commentary". You may need a bottle of Pepto-Bismol handy because...

WHAT IN THE NAME OF HOWARD COSELL IS GOING ON HERE?

Holyfield is a fan of Trump, and vice versa, and if that wasn't cringeworthy enough, this could go down in history as the worst call of a boxing match this side of that wannabe Cosell clone, Stephen A. Smith.

What Dumb Donald I & II are hoping for, of course, are enough suckers to buy the PPV just for their take on the fight. These two wouldn't know a left jab from a left turn.

Never has the phrase, "caveat emptor", been more appropriate.
===============================
What do NBA star Iman Shumpert, Olympic gymnastics champion Suni Lee, and WWE superstar/reality TV vet Mike "The Miz" Mizanin have in common?
All three are in the field for the fall season of ABC's Dancing With The Stars, beginning Monday. The field also includes actor Martin Kove (Cobra Kai) and recent Bachelor Matt James. Miz becomes the 4th WWE personality to compete on Dancing, after Stacy Keibler (3rd place, spring '06), Chris Jericho (now with AEW), & Nikki Bella. I'd bet that Lee would be an early favorite to win the mirror ball.
================================
Former NFL star Nate Burleson is being primed to be CBS' answer to ex-Giant Michael Strahan.
Burleson (The NFL Today) is now a co-anchor on the newly rebooted CBS Mornings, and, like Strahan, will be seen 6 days a week during football season.
All that's needed now is to revive an old game show, like, for example, What's My Line?, and give Burleson the gig (Strahan hosts the current iteration of The $100,000 Pyramid in addition to working on Good Morning, America for ABC).
Posted by hobbyfan at 12:49 PM