And so, the rats are fleeing the sinking ship, while one rat whines......

Thursday night, President Trump finally admitted that he will leave the White House on January 20, but still refused to concede defeat. His ego won't allow it.

That, however, runs contrary to the reports that Trump had given his life to Christ in a meeting with Dr. James Dobson of Focus on The Family 4 1/2 years ago, a meeting we presume was facilitated by Mike Pence. The Bible tells us that, among other things, pride goes before the fall, and you reap what you sow. Trump threw the insurrectionists under the bus in his speech, trying to make himself look like a hero when he clearly is not. All he's trying to do is save his own reputation, but that's already in tatters.

Meanwhile, Transportation Secretary Elaine Chao (Mrs. Mitch McConnell) resigned from her post in the wake of the riots. Late Thursday, Education Secretary Betsy DeVos also resigned. Members of Congress on both sides of the aisle were calling for the invocation of the 25th Amendment to the Constitution, and the only reason for that in this case would be that Trump is not mentally fit to lead this country.

However, Missouri Senator Josh Hawley was shredded by two of Missouri's biggest newspapers, the Kansas City Star and the St. Louis Post-Dispatch for his part. NY Congresswoman Alexandria Ocasio-Cortez blasted Hawley for complaining about losing a book deal over the riots.

Said book, due in June, was to be published by Simon & Schuster, which published a pair of tomes last year that shredded Trump. This was the publisher's statement on Twitter: 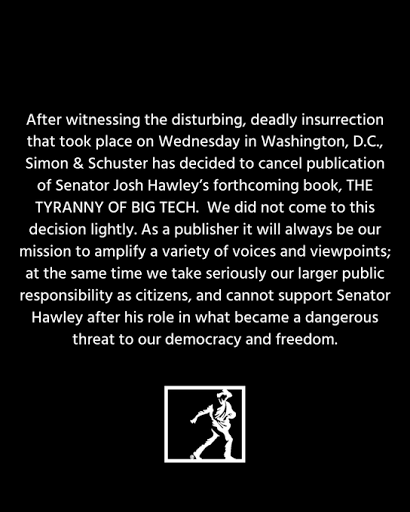 Hawley's response? He felt he was being censored, referring to the publisher's decision as "Orwellian", referencing George Orwell's legendary 1984.

No, sir, that's not the case. The truth is, you cast your lot with swine, buying into the big lies about the election. There's a resolution being drafted that would toss you out of Congress, along with the rest of the fools who followed Trump to political oblivion. It won't go anywhere because it requires a 2/3 majority to pass the resolution. Simon & Schuster, as seen above, cannot in clear conscience, support you and your views, and you have only yourself to blame.

But, there are reports that some of the remaining members of the mob that stormed the Capitol are hiding in Washington or its vicinity, plotting their next move. What awaits these people is arrest on Federal charges, then deprogramming. These idiots are throwing their lives away for a delusion. Hawley whined about Simon & Schuster being "woke". No, sir. You need to wake up. Yesterday.

This is possibly off-topic - but you decide:
In the run-up to Wednesday's unpleasantness, Don Junior and his galpal hosted a mini-gala for the faithful, featuring source music that included "Gloria", the '80s hit by the late Laura Branigan.
DJTJ put up a video of the celebration, which went viral instanter.
This in its turn led to Laura Branigan's estate - "legacy management" in the modern argot - putting out several statements objecting to the unauthorized use of her music (this being a common practice in Trumplandia).
Expect this to result in mainly fruitless legal action on both sides.

As to Senator Hawley and his book, it's not as if there aren't any number of rightwing niche publishers who wouldn't be more than happy to pick it up (although they likely wouldn't be able to pay Simon & Schuster-level money for the rights).

We all ought to face the uncomfortable fact:
We're NEVER going to be completely rid of Donald Trump.
Especially with The Next Generation warming up in the bullpen.

- And remember: we've got all of modern technology to thank for it.

As Rod Serling used to have his characters say: Dwell on that, will you? Just dwell on that ...

And so the Branigan estate joins Neil Young and a handful of others in raising a fuss over Team Pampers using their music without permission. Dumb Donald II, just like his dad, thinks he's above such things. Affluenza will do that.