How should President Trump's term end?

With a week-plus to go before Joe Biden is sworn in as the next President of the United States, the current President, Donald John Archie Bunker Trump, remains defiant, clinging to the misguided belief that the election was "rigged" or "stolen" He reluctantly conceded that Biden would be coming in a week from tomorrow. However, his brainwashed followers still are planning another insurrection, not only in Washington, but in every state capital in the country, including in Albany.

House Speaker Nancy Pelosi has initiated the process for a 2nd impeachment, this time charging America's Oldest Baby with inciting the Legion of The Brainwashed to riot six days ago. Several Republican Senators & Representatives, including one of the 518's own, Elise Stefanik, continue to stand behind Trump.

A local pastor referenced a prophecy that said that Trump would be impeached twice, but would not be convicted. That prophecy is halfway to being fulfilled. However, what about the rebels in Congress? The panel on ABC's The View weigh in.

To censure all those Senators & Representatives would result in more runoff elections like the ones they had in Georgia last week.
Before we go further, we must ask ourselves why did these fools trade their oath to the Constitution in exchange for loyalty to a attention-addicted demagogue who had no political experience, and, in the minds of many of his detractors, has sought to profit from his position, as if the White House and the country were another business venture. Over 100 lawmakers have put their careers in jeopardy because of their loyalty not to the Constitution, but to a 74 year old man-child whose reputation is now irrevocably destroyed. Once he was elected, he became addicted to the power that comes with the post. His behavior is that of a spoiled child unaccustomed to defeat, and he'll never admit he was wrong, either.
The goal of this 2nd impeachment is to ensure that Trump can never run for public office again. I'd extend that to his 2 oldest sons, Dumb Donald II and Stupid-E, as well as daughter Ivanka, and anyone else stupid enough to stand by him. The NY Bar Association is contemplating revoking Rudy Goofiani's license to practice law. Just as well, as he is past retirement age anyway.
This, friends, is the last perception of Donald J. Trump. 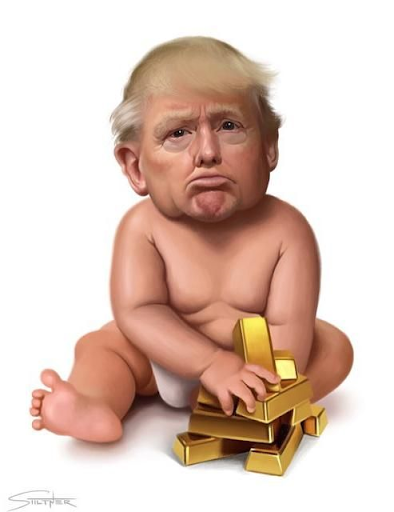 To answer the question in the subject box, there's two solutions.
1. He leaves as quietly as possible. He's already said he won't attend the inauguration, but those plans, of course, are subject to change, especially if he continues to behave like a comic book villain.
2. I have had a vision of Trump leaving office in a straitjacket. escorted out by two men from the nearest psychiatric hospital.
What do you think?
Posted by hobbyfan at 3:26 PM