After the final game of the 2020-1 NFL regular season ended, with the Washington Deviants defeating the Philadelphia Eagles, 20-14, to clinch the NFC Least, the accusations started flying that Eagles coach Doug Pederson, a few years removed from winning the Super Bowl, had essentially tanked in the 4th quarter by lifting starting QB Jalen Hurts in favor of little used 4th year QB Nate Sudfeld. 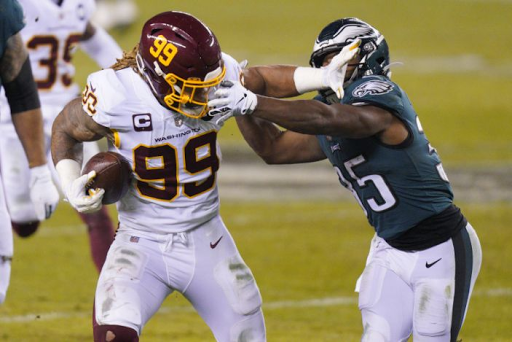 Washington's Chase Young tries to evade Philadelphia's Boston Scott on a fumble return.
Why would Pederson resort to such carnival stupidity? Perhaps to fix it so that the Giants, who held the tiebreaker over Washington after sweeping the Deviants earlier in the season, couldn't win the division and the right to be a 1st round sacrificial lamb vs. Tom Brady & Tampa Bay. Some current Giants players, and former QB Eli Manning, per Yahoo!, certainly felt it was a tank job.

But let's give credit where it's due to the Deviants, who got hot in the season's final few weeks. They were the ones who ended Pittsburgh's attempt at a perfect regular season. If not for their own ineptitude earlier in the season, they could've beaten the Giants.

But could they beat the Buccaneers? Questionable. The Giants and Eagles were Brady's NFC East Kryptonite as the QB of the New England Patriots, and, had the Giants won the division, they'd be looking at revenge after Tampa beat them in the regular season.
======================================
The Denver Broncos played with heavy hearts in their season finale vs. Las Vegas on Sunday, after learning of the death of one of the team's all-time greats, Floyd Little, on Saturday. However, the Raiders won the game on a last second touchdown by Josh Jacobs, 32-31.
=====================================
As expected, the Jests dismissed Adam Gase after a 28-14 loss to New England on Sunday. The Jests finish 2-14, but will get principal owner Woody Johnson back in a couple of weeks as his stint as Ambassador to the UK ends. Johnson might need to send son Chris to the warehouse to take inventory of baby shampoo, Motrin, baby powder, etc.....!
Meanwhile, Patriots QB Cam Newton was playing for his job, throwing three touchdown passes and catching one himself on a wide receiver option pass from Jakobi Meyers. New England's 3rd place finish is their worst since Bill Belichick took over as head coach in 2000.
====================================
The playoff picture looks like this:
AFC:
Kansas City, despite losing to the Chargers, has the #1 seed, and a 1st round bye.
1st round pairings:
Indianapolis @ Buffalo.
Cleveland @ Pittsburgh. The Browns beat the Steelers on Sunday, so they'll be rematched in the Sunday nightcap.
Baltimore @ Tennessee.
NY Governor Andrew Cuomo has given the go-ahead for fans to attend the Colts-Bills game.
NFC:
Green Bay is the #1 seed.
1st round pairings:
Tampa Bay @ Washington.
Los Angeles @ Seattle.
Chicago @ New Orleans.
Playoff predictions coming Friday.
Posted by hobbyfan at 7:13 AM