There are now calls for the invocation of the 25th Amendment to the Constitution, which would remove lame duck President Donald Trump from office well before his successor, Joe Biden, is sworn in on January 20. There are calls for a 2nd impeachment of a mentally unbalanced, perhaps bi-polar, Trump. 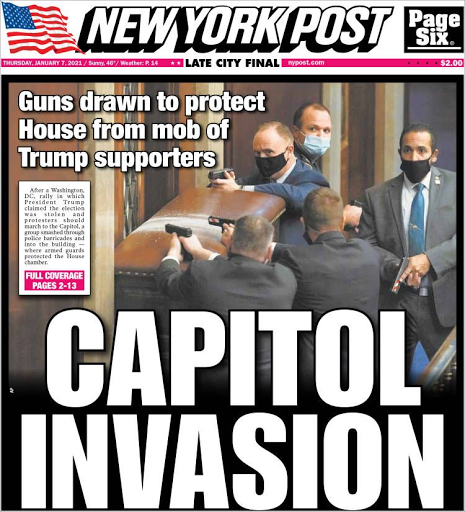 Trump tricked his brainwashed supporters into storming the Capitol, all the while knowing he wouldn't be marching with them after all. The four remaining living ex-Presidents (Trump will soon make it 5), Jimmy Carter, Bill Clinton, George W. Bush, and Barack Obama, condemned Wednesday's actions, with Bush likening it to what would happen in a banana republic. The Legion of The Brainwashed lost track of their enabling leader. More than 50 people were arrested, and the FBI is hunting for more. Four people have died.

Their blood is on Trump's hands.

And, yet, there are still morons who think the election was "stolen" when it clearly was not. Outgoing Georgia Senator Kelly Loeffler experienced an epiphany, if you will, when she, along with a few others, decided not to object to the Electoral College results.

Just before 4 am (ET) this morning, VP Mike Pence made it official. Biden won. Trump lost.

The only message remaining for America's Oldest Baby and his idiot followers is this:

So let me get this straight: Trayvon Martin, Tamir Rice, Jacob Blake, Breonna Taylor and the BLM protestors were all "thugs who had it coming", while Kyle Rittenhouse and these Capitol Critters are "great patriots who were treated very badly and unfairly". Got it.

What happened to "When the looting starts, the shooting starts", Donny? Where's all that "Law and Order" energy now? That's what I thought. A two-week wait is too long. Covidiot needs to go. Now.

Anyone want to think Trumpenstein was mentally ill to begin with?