Every state capitol in the US, from Albany to Austin, was heavily guarded leading up to the inauguration of President Biden on Wednesday, just in case the Legion of The Brainwashed actually showed up. By the time the inauguration began, the former President, Donald Trump, had already left the scene, unwilling to break bread with his successor. Unwilling to publicly admit he lost.

As for the threats of protest? There was one lone soul in Pennsylvania. Same thing in Albany. 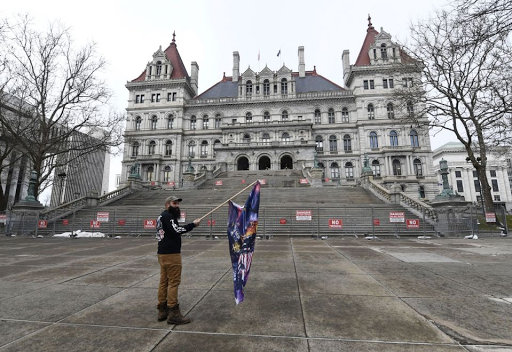 Image courtesy of Yahoo!
Mark Leggiero found himself all by himself at the state capitol, carrying a makeshift Trump flag, and gave a statement to the Daily Gazette. Disappointed? Sure, but he should've known that by this point, as the kids say, the majority of the protesters were all talk and no walk.

The Proud Boys disowned Trump. They got their 15 minutes of fame thanks to him, and this is how they thank him? Well, their brains were a little scrambled to begin with.

Unfortunately, there's still some brainwashed fools in Washington. Freshman Marjorie Taylor Greene went on Twitter and pinned the blame for 100 coronavirus-related deaths to the incoming President. Sorry, but that's not true. Your boy Trump fumbled the ball a year ago, in the hope of avoiding mass panic, or so he claimed. As fellow blogger Chuck Miller suggests, MTG would be wise not to cross swords with Alexandria Ocasio-Cortez. It won't end well. A Southern-fried bimbo (MTG is from Georgia) challenging "Alex From The Block"? (AOC is from the Bronx, aka J-Lo Country) Fuhgeddaboutit! MTG will end up like Trump, a 1-term wonder.

Same with Lauren Bohbert in Colorado. When you sleep with dogs, in this case, QAnon cultists, you're bound to get fleas.

Already, Biden is signing executive orders to reverse some of Trump's ill-advised policies and ideas. The fun is just beginning.