Caught in the stampede

Depending on what happens today between defending champion Kansas City and upstart Cleveland, the road to the Super Bowl in the AFC could still run through Buffalo.

The Bills eliminated Lamar Jackson and the Baltimore Ravens, 17-3, Saturday night, knocking Jackson out of the game in the process. His counterpart, Josh Allen, wasn't as spectacular as he was a week earlier against Indianapolis, but then, he didn't have to be. Buffalo's defense sprang to life to save the night.

In the 3rd quarter, already down 10-3, Jackson drove the Ravens into scoring position, but an ill advised pass into the end zone was intercepted by Taron Johnson, who ran the distance, 101 yards, tying a postseason record held by George Teague, to ice the game. 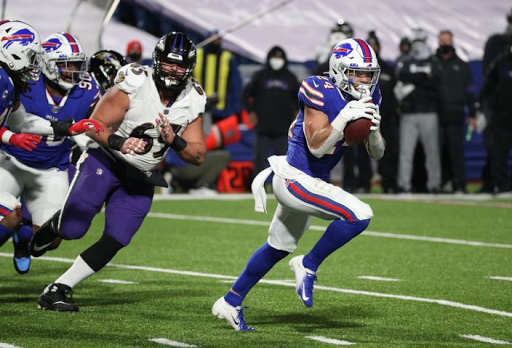 At the end of the quarter, a bad snap had Jackson retreating all the way toward his own end zone. His pass fell incomplete, but Jackson was called for intentional grounding. Worse, he laid prone in the end zone, and was removed from the game with a concussion.

Rookie Tyler Hundley, activated from the practice squad earlier in the day, took over at quarterback to start the 4th quarter, and came across looking like a Jackson clone. However, he couldn't get the Ravens into the end zone, and the 6,800 fans in Bills Stadium began celebrating.

You'd have to go back to 1995 for the last time the Bills had gotten this deep into the playoffs, but the question now is, where do they play next week in the AFC title game?

Cleveland can help answer that question if they upset the Chiefs today. The Browns can't be too happy with the disrespect shown by the oddsmakers, who have Kansas City as a 10 point favorite, this despite Cleveland having beaten Pittsburgh the last two weeks, dropping a combined 72 points on the Steeler defense in those two games.
======================================
Meanwhile, in Green Bay, Aaron Rodgers shredded the top ranked defense in the league, and even ran in for a score, as the Packers dismissed the Los Angeles Rams, 32-18. The Packers now await the winner of tonight's game between Tampa Bay & New Orleans, safe in knowing they'll host the NFC title game one week from tonight.
Posted by hobbyfan at 7:56 AM