Editorial cartoonists are having some fun with President Donald Trump's telephone tantrum toward Georgia Secretary of State Brad Raffensperger on Saturday. To wit: 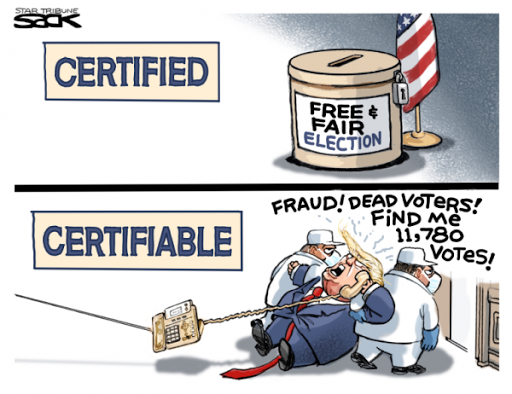 That's just an example. The part of Trump being dragged out by men in white suits is something that still could happen in two weeks, as long as Trump continues to play the part of an unhinged, deranged, perhaps bi-polar, 70-something man-child who can't stand the idea of losing.

Of course, Stupid-E (Eric Trump) has gotten on the stump for his father, threatening any sitting GOP lawmaker that doesn't support Daddy Dum-Dum with being primaried by a candidate endorsed by Trump when their re-election is due. 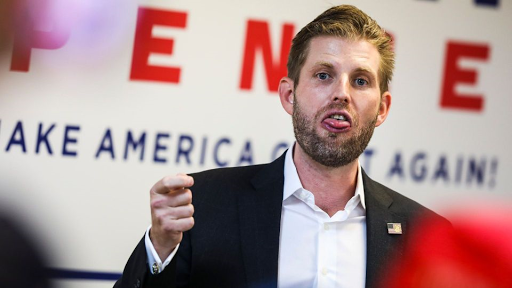 To his credit, Vice President Mike Pence made it clear earlier today that he does not have the authority, contrary to President Pampers' claims, to reject the Electoral College's certification of President-elect Joe Biden's victory two months ago.

Nearly three hours ago, as I write, a joint session of Congress convened, with Pence beginning the ceremonial task of confirming the result. Unfortunately, President Pampers' brain-dead supporters, misled to believe that Trump would march with them (he slipped away back to the White House), made their way to the Capitol, breached the gates, and stormed the premises, putting a halt to the proceedings. There have been reports of injuries.

Trump is propping up his Apprentice facade to stir up the Legion of The Brainwashed, but this may be the final nail in his political coffin. His consigliore, disgraced attorney Rudy Goofiani, has said any GOP lawmaker not in lockstep with President Pampers should leave the party. There's a better chance of Goofiani and the Trumps being sent to Bellevue.

It'll get worse before it gets better.

If there's any type of silver lining to what went down yesterday, it's that yesterday's fiasco just insures that Trump's ugly mug will never be chiseled onto Mount Rushmore. Chump wanted to be Abraham Lincoln, but he's closer to Benedict Arnold.

Seriously, though: Trump needs to be impeached and removed from office ASAP, and all of those U.S. senators who enabled him need to be removed as well. As for those trailer trash losers who invaded the Capitol Building, I sincerely hope that they are identified, found, arrested and given life in prison for attempting to overthrow the U.S. Government. The US Gov. found the Boston Marathon bombers in less than a week, they'll find you, and they weren't stupid to expose their faces on camera!

Also, I'd like out how during yesterday's coup attempt, that there were ZERO bullets fired, ZERO tear gas bombs dropped, ZERO gun shots fired and ZERO arrests made (so far). Meanwhile, there were not one, but several violent attacks on peaceful Black Lives Matter protestors, who I'd like to point, have made ZERO attempts to storm the U.S. Capitol building and try to overturn a fair election. So before anyone tries to tell me that white privilege isn't a thing, kindly shaddap!

I'm thinking fear of reprisal from the "Orange Goblin".