They're still buzzing in New York after the Mets pulled off a trade that brings superstar shortstop Francisco Lindor to Flushing.

Lindor, along with pitcher Carlos Carrasco, were sent to the Mets on Wednesday in exchange for infielders Amed Rosario & Andres Giminez and 2 prospects. The immediate reaction from the press, of course, is that new majority owner Steve Cohen is very serious about making the Mets a contender again.

And, as far as the tabloid press in NYC is concerned, they're waiting for the Yankees to make the next move. Stay tuned.
=========================================
It's just the first day of the NFL playoffs, and two division champions have already been eliminated.
The NFC Least champions, the Washington Deviants, fell to Tampa Bay, 28-24, even though they did make things interesting in the 4th quarter. Earlier, NFC West champion Seattle was beaten by division rival Los Angeles, creating the following scenarios surrounding today's Bears-Saints game:
If #2 New Orleans beats #7 Chicago, then Tom Brady & the Buccaneers will get a 3rd shot at Drew Brees and the Saints next week. New Orleans, you'll recall, swept the season series.
However, if the Bears pull the upset, they will get a 3rd game vs. #1 Green Bay, and Tampa Bay will host the Rams.
Over in the AFC, it might've seemed like the zebras were trying to throw the game in favor of AFC South runner-up Indianapolis, but the East champion Buffalo Bills advance to next week's divisional round. The refs went blind late in the 4th quarter, denying the Bills what would've been a game clinching fumble recovery. Instead, Philip Rivers, playing what might be his final game, tried a Hail Mary on 4th down that went incomplete as time expired.
If form holds, there will still be two AFC North teams in the tournament come next week. For that to happen, Baltimore, a road favorite, would have to eliminate South champion Tennessee, and Cleveland, despite being depleted due to COVID-19, would have to beat North champion Pittsburgh for the 2nd straight week. The Browns, as we've previously reported, will be without coach Kevin Stefanski (COVID).
The Steelers-Browns game will decide next week's matchups. If Pittsburgh wins, they will go to Buffalo, and the Baltimore-Tennessee winner goes to Kansas City. If Cleveland wins, they go to Kansas City, and the Ravens-Titans winner will visit Buffalo.
============================================
As we noted on Friday over at Tri-City SportsBeat, baseball Hall of Famer Tom Lasorda, who pitched for the Schenectady Blue Jays in the late 40's before signing with the then-Brooklyn Dodgers, passed away at 93. 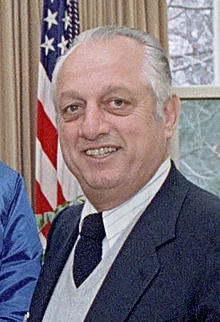 File photo courtesy of Wikipedia.
Lasorda was a 3rd base coach and manager for the Los Angeles Dodgers, moving into the dugout to succeed Walter Alston in 1976. He led the Dodgers to 4 World Series, winning 2 (1981, 1988), and directed Team USA to a gold medal in the 2000 Summer Olympics.
Lasorda was also a bit of a clown, appearing as the Dugout Wizard on The Baseball Bunch in the 80's. The Wizard would often claim he would "disguise himself" as Lasorda, but any fan that watched the show knew better. I've no doubt that the Dodgers will dedicate the 2021 season to Lasorda, hoping to repeat as World Series champions.
Rest in peace.
Posted by hobbyfan at 7:18 AM