Based on a British sitcom, Porridge, ABC's On The Rocks was originally coupled with Barney Miller at the front of their Thursday night lineup.

But when Barbary Coast tanked, Rocks was moved to Mondays to make room for Welcome Back, Kotter. with Miller moving into Rocks' old slot. As a result, a clever advertising campaign to promote Miller & Rocks----"Funny cops & funny robbers"---went to waste, and Rocks was history by season's end. 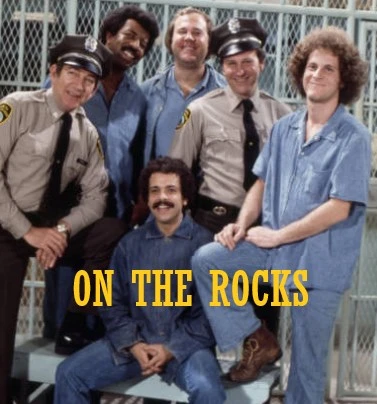 Broadway star Jose Perez, whose previous TV experience included the short-lived Colucci's Department a couple of years earlier, top-lined as Hector Fuentes, a street-smart con just sent back into stir. Hal Williams swapped his policeman's blues from Sanford & Son for a prison two-piece as Lester. Audiences were introduced to Rick Hurst, later of Dukes of Hazzard, as dumb-as-a-bag-of-hammers Cleaver. Missing from the group shot above is TV vet Tom Poston. Seeing a commercial for the show, it looks like Leonard Stone was in the cast, but IMDB doesn't acknowledge it, so it might've been a similar fellow.

My folks & I gave this show a try, seeing as how we were already into Barney Miller. So much potential, wasted by the fact that viewers apparently abandoned the show. 24 episodes were produced, a full season's worth, but most have been lost, due likely to the network practice of the day of wiping videotapes for re-use, a trend more commonly associated with daytime programming.

The two guards in the photo - Leonard Stone and the other one whom I don't recall - were in the pilot; both were replaced when the series order came through.
Tom Poston played a sympathetic guard, who was usually played for a patsy by the inmates.
Mel Stewart (the original Jefferson on All In The Family) was the other replacement guard; he was a real hard-nose, and the one Fuentes had to outwit most weeks.
Also added after the premiere was the warden, who was Logan Ramsey (you'd know the face); he was a weaselly bureaucrat who wanted to know as little as possible about what was going on in the prison.

Why was Stone cut, Mike? As I wrote, he appeared in the ad, taken from the pilot (w/Ernie Anderson voice-over), and, like Tom Poston, seemed to be available for just about anything back in those days.

IIRC, I think the reason Mel Stewart left All in The Family was because of being cast in "Roll Out" as a DI.