The hype surrounding this year's Home Run Derby had to do with Angels pitcher/DH Shohei Ohtani, the major league home run leader with 33 round-trippers. The bracketing had Ohtani set up to face defending champion Pete Alonso of the Mets in the semi-finals.

The thin air in Denver certainly worked in Alonso's favor, but not Ohtani's. Alonso mopped the floor with Kansas City catcher Salvatore Perez in the first round, as the two obliterated the event record books. However, Ohtani couldn't keep his end of the deal, and was upset by Washington's Juan Soto in double overtime. They're now claiming Ohtani was "exhausted" upon arriving in Denver. And he's the AL starting pitcher AND DH tonight!

Alonso dismissed Soto in the semi-finals, and that led to a matchup in the finals with the feel good story of the tournament, Baltimore's Trey Mancini, a recent cancer survivor. Mancini had eliminated Oakland's Matt Olson and host Colorado's Trevor Story to get to the final. Alonso came from behind to claim his 2nd straight Derby trophy and a $1,000,000 grand prize.

Steve Cohen, show him the money! Photo courtesy of Yahoo!
=========================================
ESPN's resident idiot savant, Screamin' A. Cosell (Stephen A. Smith), might have accidentally sabotaged Ohtani's chances with an unhinged rant on First Take where he claimed Ohtani couldn't be the face of Major League Baseball because of the language barrier.
By the end of Monday, Screamin' A was eating crow, and apologized for his insensitive remarks, promising a lengthier mea culpa on this morning's First Take. Coincidentally, the apology came after Ohtani was eliminated from the Home Run Derby. Hmmmmm. At least, Smith is apologizing, but, just the same, the bloviator is ESPN's answer to Tabloid Carlson. You know what they say about birds of a feather......!
=========================================
And speaking of the unhinged........!
GOPers are trying to paint the January 6 riot at the Capitol as anything other than violent, and casting Ashli Babbitt, an Air Force veteran who bought into the QAnon garbage, as a martyr after she was shot by a Capitol officer. Citizen Pampers wants to know who the shooter was, even though the officer was cleared of any and all charges.
Disgraced barrister Rudy Goofiani, who really needs to stay away from cameras for the rest of his life, went on Newsmax on Monday, and tried to whitewash the riot. Like Citizen Pampers, Goofiani had no evidence to support any claims that the Democrats had anything to do with Babbitt's death. 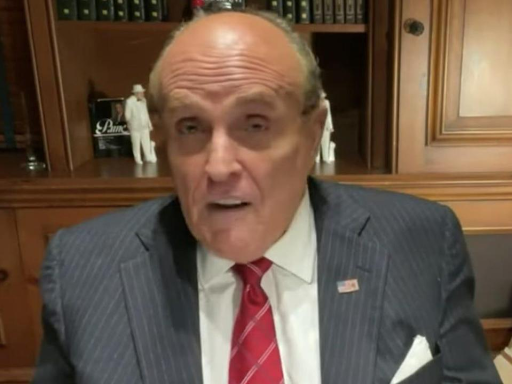 Spare me.
And at the CPAC convention over the weekend, a right wing group handed out cards that outlined a 7 point plan to reinstate Citizen Pampers to the presidency. Unfortunately, that plot has more holes than a cake of Swiss cheese. DoorMatt Gaetz has said recently he would nominate Pampers as the next Speaker of the House if the Repugnants retake control of the House in 2022. I don't think so. Citizen Pampers and his family of swine will be facing legal problems from now until, oh, I don't know, 2024?
==============================================
Death has been busy lately.
First, former San Francisco 49ers tight end Greg Clark passed away near the end of last week at 49.
Then, there was a trifecta on Monday.
Former Denver Broncos offensive line coach Alex Gibbs, 80, passed away after an illness.
Actor Charlie Robinson, best known for his role on Night Court in the 80's, passed away at 75.
College football hero-turned-wrestler Paul Orndorff, 71, passed away due to complications from dementia. Orndorff was a cancer survivor a decade ago. We have more on him over at Saturday Morning Archives.
Rest in peace, one and all.