The GOPers don't want the truth about 1/6 known. Their saboteurs won't get very far

House minority leader Kevin "The Body Snatcher" McCarthy picked five fellow GOPers to be on Nancy Pelosi's January 6 commission. Unfortunately for McCarthy, two of the five have already been rejected. 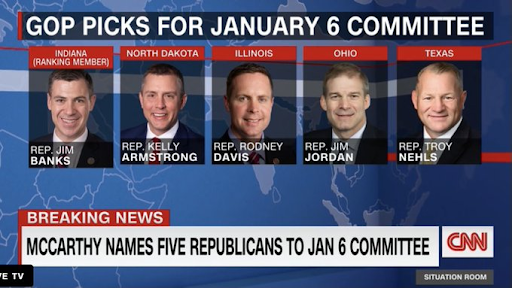 The real life Fibber McGee, Jim Jordan of Ohio, and "Diamond" Jim Banks of Indiana were bum-rushed, leaving three lesser lights in Kelly Armstrong, Rodney Davis, & Troy Neihls. Of course, McCarthy is pitching a fit, threatening to have the GOPers start their own investigation (yeah, right) if Pelosi doesn't reverse course. McCarthy is an idiot, but I'm willing to bet that if someone did a geneology study, they'd find he'd be related to Joseph McCarthy, he of the Communist witch hunts of the 50's.

In other words, McCarthy, acting as a consigliore for Citizen Pampers, wants to ensure the GOPers control the narrative. That's not going to happen, not with so much video evidence available for use. And with Liz Cheney already on the committee, the GOPers are in deep trouble anyway if they try to obfuscate the facts.

I think they'll be opening a sanitarium just for the Repugnants real soon.