On The Shelf: A new Justice League animated book hits the shelves

Justice League Unlimited ended its run on Cartoon Network nearly 20 years ago. In fact, this year marks the 20th anniversary of the series, when it was simply titled, Justice League.

DC, seeing how well Batman: The Adventures Continue did last year, decided to take the next step with a new miniseries based on JLU.

Justice League Infinity is co-written by veteran TV & comics writer J. Marc DeMatteis, who was a principal writer on the show, and producer James Tucker. Artist Ethen Beavers is making his DC debut, but worked on the series as a artist at WB.

The plot is simple. While the Martian Manhunter has taken leave of the League after the series' conclusion, he has set out on a journey to learn more about Earth life. Meanwhile, Amazo, the android programmed with the powers of the League, is on a quest of his own, to seek & discover his true purpose. Now, Amazo was repackaged for television as a golden construct with red eyes and no nose or mouth. He was treated as more of a sympathetic character in his appearances on JLU, and that continues here. 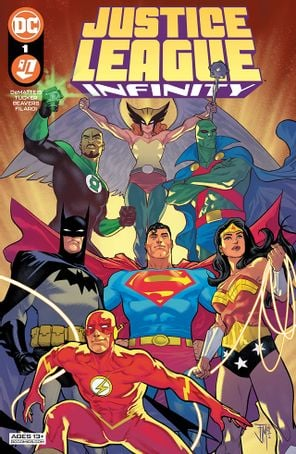 While the League celebrates the birthday of the Flash (Wally West), the party is disrupted by warring factions from Apokolips. See, when JLU ended, Darkseid was killed off, though he remains a major player in main line DC continuity. Something tells me ol' crater-face will return before this is all over.
Rating: A-.
===========================================
With season 2 of Stargirl to begin next month on CW & HBO Max, DC is whetting readers' appetites by bringing Stargirl to the printed page.
Stargirl Spring Break Special, written by series creator (and co-executive producer) Geoff Johns, sets the stage for a new Stargirl solo series, due later this year, and a possible revival of the Justice Society. If you can get past the artwork of Todd Nauck, you're fine. His cartoony style is no longer fitting.
Rating: B.
============================================
80's hero He-Man will return in a new animated series on Netflix later this month, which we've discussed over at Saturday Morning Archives. After a recent crossover miniseries with DC's Injustice line, the Masters of The Universe are moving to Dark Horse for a 4 issue miniseries. Filmmaker Kevin Smith, who is curating the new cartoon, is also co-writing the book. Tim Sheridan, a DCAU veteran who's worked on a number of movies for WB, and made his solo writing debut on Teen Titans Academy, is also on board. Sheridan has gotten mixed reviews for TTA, largely because he is not an experienced comics writer. Movies are a completely different animal, as he's found out.
Anyway, Smith, Sheridan, & company are putting some meat into the backstory surrounding He-Man and his alter-ego, Prince Adam of Eternia. Mike Young tried that nearly 20 years ago, but Cartoon Network torpedoed his series without proper closure. Seems as though the 1990 series helmed by Jean Chalopin has been ret-conned out, which is good. Skeletor looks scarier than ever, and that says something.
This and the TV show should be fun.
Rating: A-.
============================================
Other stuff: Marvel Comics is playing with fire again, this time deciding to kill off Doctor Strange in a miniseries debuting in September. Why do that when there's a movie coming out? Money, of course. Marvel knows their audience are mostly marks.......Aquaman's arch-enemy, Black Manta, and his son, the new Aquaman (formerly Aqualad), will each have their own miniseries from DC, out in September, while the original Sea King teams with Green Arrow for a 6-issue miniseries, set to debut in October. Let's put it this way. Manta's finally getting some respect & recognition after more than 50 years.......For those who haven't seen Disney+'s WandaVision, be prepared for a shock, as Marvel is also killing off the Scarlet Witch pro tempore so that her supposed father (they're not sure from one year to the next), Magneto, can headline a miniseries. Wanda Maximoff also figures into the Doctor Strange mini, so, yeah, Marvel's soaking the marks worse than anyone.......Turns out that the Shield 1-off from Archie, which we reviewed last week, might not get any continuation. Rob Liefeld quit the project over retailer variant covers that would've spoiled some details, and now the entire revival of the Mighty Crusaders is in turnaround. Again. Liefeld had the same problem at IDW over a GI Joe-related project he was working on for them, but that was resolved. Not so much at Archie, which can't buy a break. Rob is growing up, after all.
Posted by hobbyfan at 9:38 AM