Germany changes its women's gymnastics uniforms. So why are they in 9th place?

In the first Olympiad since the Larry Nassar scandal broke here in the US, it is Germany that has decided to combat the stereotypical sexualization of female gymnasts. 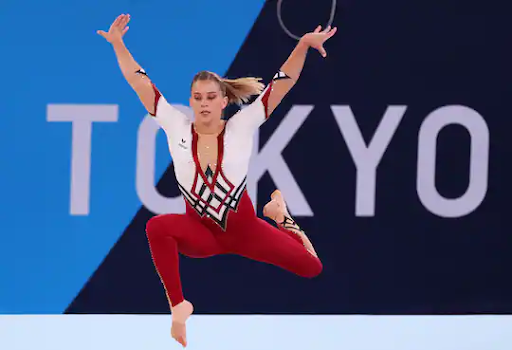 Elisabeth Seitz. Photo courtesy of Getty Images/Google.
The women's gymnastics team have swapped the traditional leotards for bodysuits, or, unitards, that extend down to the ankles. You'd think the US team would've done that, too, but, nope. Team USA is sticking with the leotards, for now, anyway, and they sit in 2d place after qualifying rounds. The Germans? 9th place.

It would seem that despite the progressive decision by the Germans to break the stereotype, despite the talent on the team, the judges might not see it that way. Yet. The new unitards are meant to be more comfortable to wear, perhaps allowing some extra freedom of movement. Remember, too, that the men have worn more comfortable uniforms, including loose fitting uniform pants, for forever.

I think part of the reason the Americans haven't yet followed suit is because Madison Avenue doesn't want them to. Former Olympian McKayla Maroney is in a commercial for GEICO. Current superstar Simone Biles has done ads for Uber Eats with one of the guys from the rebooted Queer Eye For The Straight Guy. Advertising agencies have their own stereotypes that they are less willing to break. In other words, there's a different form of conditioning that has to be broken.

Gold medals=money. We promote our heroes, then exploit them. Instead of truth, justice, and the American way, as promoted in the TV version of The Adventures of Superman in the 50's, promoters and advertisers see it differently. Promote, exploit, & profit. That, to them, is the American Way.