It seems only fitting on the 4th of July that we'd take a look at Archie Comics' patriotic hero, The Shield, as the company tries once again to reignite its adventure line.

That's the good news. Not so good? Entrusting the project to Rob Liefeld.

Co-written by Liefeld and David Gallaher, and drawn by Liefeld, The Mighty Crusaders: The Shield, to use the full title, is the kick-off to a series of 1-shots that will try again to bring the super-team into the 21st century. However, there is no rhyme or reason to dropping the reader into the middle of something, which was Liefeld's MO at Image Comics (i.e. Youngblood) nearly 30 years ago. The new Crusaders are a mixed bag, and we're starting off with three Shields. 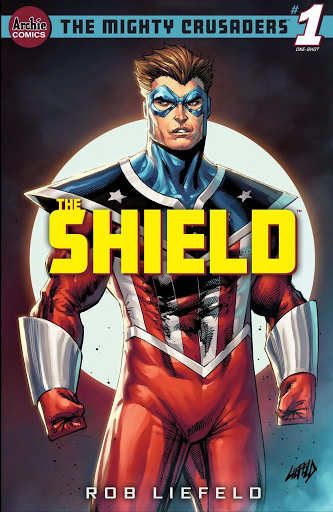 2. Roger Fleming, aka Lancelot Strong. Here's where Liefeld makes his first mistake. Strong was introduced by Joe Simon in 1959 when Archie initiated its adventure line during the Silver Age. Liefeld & Gallaher, for whatever reason, decided that Strong was now a code name. Bad idea.

3. Victoria Adams. Introduced in a promising but short-lived Dark Circle miniseries written by Alex Segura, who's no longer with the company, a few years ago, Victoria is the current Shield, and leader of the Crusaders. In typical Liefeld fashion, she's now a little more well endowed. Adams' book ran into some unforeseen delays, which prompted an abrupt cancellation.

Liefeld & Gallaher have also altered Flygirl's costume (the code name is now one word instead of two), giving Kim Brand a helmet that covers her entire face. Bad idea #2. They want the boys to pay no attention to her bug-shaped helmet, and look at her cleavage, just like Victoria.

Other changes: Kip Burland is back as the Black Hood, so the Greg Hettinger era from Dark Circle (2015-7) is officially out of canon. We're introduced to a new Comet, Rob Conners, and a new hero, Captain Commando, debuts, billed as a "cutting-edge cyborg". Stop the pain!! Liefeld is still writing like it's 1991, not 2021. Luckily, Liefeld's artistic style has matured some since his debut in 1987 at DC.

No date's been set yet for the next chapter, and that, dear friends, is a problem.