They held a runoff election in Texas the other day, and former president Dumb Donald Trump put his endorsement behind Susan Wright. Which amounted to the kiss of death, because Jake Ellsey won the GOP nod. 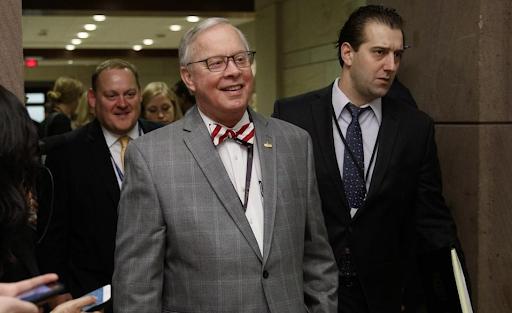 Photo courtesy of Yahoo!
If the national Repugnant committee hasn't figured out yet that most of the country has Trump Fatigue, they never will. For his part, ol' Pecos Pampers himself is trying to spin this as a win-win for the party. He just doesn't want to admit failure. Can someone see if his old psychologist, Dr. Zigmund Ziff, is still practicing? Old school wrestling fans will get the reference.

Back at home, NY Rep. Elise Stefanik certified her membership in the GOPer Liars' Club Tuesday by trying to pass the buck on blame for the January 6 insurrection, accusing House Speaker Nancy Pelosi, who's in charge of the committee investigating the incident, of being responsible.

Just tell me something. How much extra do these lawmakers get paid to compromise their personal beliefs to lie to the public?

And, then, there's the sad story of Empty-G (Marjorie Taylor Greene) & DoorMatt Gaetz getting chased away from their own hastily scheduled presser at the Department of Justice by protesters shouting them down. The more those two dimwits are seen together, the more likely it could be, though we don't know for sure, that there's something going on behind the scenes......! Just sayin'.