Olympic gymnastics champion and Uber Eats endorser Simone Biles withdrew from the team finals on Tuesday, and will not compete in the all-arounds tomorrow due to what she has acknowledged are mental health issues.

And like tennis star Naomi Osaka, who was eliminated from the Olympic tournament, representing host Japan, on Tuesday, Biles is being unfairly blasted on social media, mostly by conservative jackasses who don't know any better, and don't care. The volatile political climate in this country is not helping women like Biles & Osaka, who took similar heat after withdrawing from the French Open & Wimbledon before advancing to the 3rd round of the Olympic tournament.

Making matters worse, after losing to Sweden in a pre-Olympic match, the US women's national soccer team was targeted by America's Oldest Baby, because he just had to get a headline, claiming the team lost due to what he calls "wokeism". 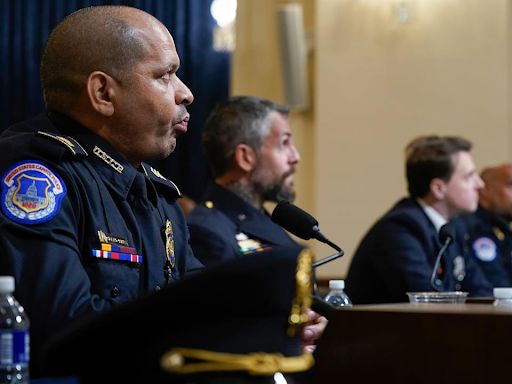 Photo courtesy Yahoo!/Getty Images.
Why mistake legitimate human emotion for "crisis acting"? Because the Repugnants don't want the truth to override their brainwashing their low information base. Word is that Fibber McGee's real-life grandson, Ohio Rep. Jim Jordan, could be subpoenaed. So could Dumb Donald Trump. While they're at it, the committee should subpoena Spam Hannity, Laura Inkblot, Tabloid Carlson, and the rest of the Fox Shmooze trash distributors, and hold them accountable.
They should remember that if you cry wolf too long, no one will listen when the wolf does come around.
=======================================
WWE CEO/Chairman Vince McMahon has entered into an agreement with Blumhouse to make a movie or docuseries chronicling the 1993-4 steroid trial, in which McMahon and certain associates were accused of distributing anabolic steroids to certain members of the troupe of that era. With McMahon himself set up as an executive producer, that means he could possibly try to rewrite the history of the trial to make himself look good, at a time when he nearly lost everything. The United States of America vs. Vince McMahon (working title) is ticketed for Netflix within the next year or two. McMahon, like Donald Trump, wants to control his narrative so badly, reality is like a foreign country to him.
Posted by hobbyfan at 10:30 AM