Baseball this 'n' that

The Yankees finally snapped a season-long losing streak vs. the Boston Red Sox Saturday night, winning, 3-1, in a game shortened to six innings due to a driving rainstorm.

In the pivotal, and what would be the final, inning, Gary Sanchez hit a 2 run homer that was challenged by the Red Sox due to possible fan interference, as a Yankee fan reached out, and cradled the ball in his arms. However, the umpires determined there wasn't enough evidence to show that the fan had gone too far over the boundary between the bleachers and the field to warrant reversing the call. The next batter, Gleyber Torres, also homered.

With the game called after six, Gerrit Cole picks up his 2nd straight complete game, but in all reality, they should've stopped the game much sooner due to the heavy rain. Why didn't they? Ratings. The ancient rivalry means big bucks to MLB's media partners, in this case, Fox. Tonight's game is scheduled for ESPN at 7 pm (ET).

But, there was some additional, unnecessary drama between the raindrops. Another fan, this one a total idiot, threw a ball at Boston outfielder Alex Verdugo, prompting manager Alex Cora to pull his team off the field. Rivalry's one thing, but this is just plain stupid.
=======================================
Just when it looked like the Mets had snapped out of an offensive funk to start the 2nd half, they blew another game late against the Pittsburgh Pirates.
For the 2nd time in a week, the bullpen melted down. Seth Lugo couldn't get out of the 8th inning, as the Bucs began another comeback. With 2 out and the bases loaded against Edwin Diaz in the 9th, Jacob Stallings sent everyone home happy with a grand slam that flew out of the reach of outfielder Kevin Pillar, offsetting two homers by J. D. Davis. Diaz suffered his 2nd straight blown save & loss.
As of now, however, only the Atlanta Braves have benefitted, shutting out Tampa Bay, 9-0, and gaining a game on the Mets. That's because the Miami-Philadelphia game was suspended in the 10th inning due to rain, and, in Washington, the Padres-Nationals game was also suspended, but for a different reason. 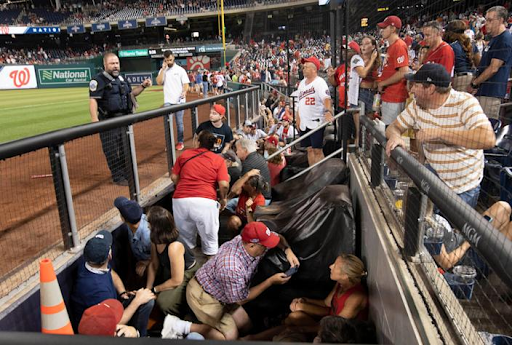 Photo courtesy of Yahoo!
A drive-by shooting took place outside of Nationals Park, which had fans scrambling for cover, thinking there was an active shooter in the ballpark. Some sought shelter in the dugouts as the teams retreated to their clubhouses.
It's not the first time there's been an active shooter incident in and around Nationals Park. There was one in 2019, but I don't think the Nats had a game that night.
Posted by hobbyfan at 8:39 AM