Word is getting out now that Tampa Bay Buccaneers QB Tom Brady played the 2020 season with a torn MCL in his knee, and waited until after the Super Bowl to have surgery. So now we're supposed to cheer for his brave, season-long effort?

It's an ego thing. Watch. While the Bucs will be prohibitive favorites to repeat, they won't.

By the way, Brady may want to avoid another made-for-TV golf special, after he & Phil Mickelson were beaten last month by Aaron Rodgers & Bryson DeChambeau. Rodgers extracted a little bit of payback for losing the NFC title game.
========================================
DoorMatt Gaetz must be a Britney Spears fan, the kind the singer doesn't need.
The Florida Congressional pervert has thrown his support behind Spears, as we've previously reported, but all he did in insulting Britney's father, James, was throw gasoline on the fire. 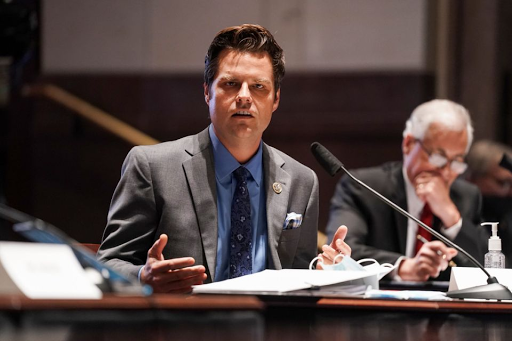 File photo courtesy of Getty Images & Yahoo!
I'm not going to repeat what he called the elder Spears, but DoorMatt is better served keeping quiet. In case he doesn't know, Brit's already spoken for, so if he's looking for a date, he's SOL.
======================================
Thursday, the Yankees & Red Sox were supposed to have the baseball theatre all to themselves in the Bronx.
Unfortunately, the Yankees have a COVID problem, as several players, allegedly including All-Star Aaron Judge, are in COVID protocols, forcing a postponement of Thursday's game, and likely also tonight's game. That should be a message to the players who've still not gotten vaccinated. Stop vexing on the vaccine, and take the shot(s).
=======================================
About the only thing ye scribe can agree with NY Post gadfly Phil Mushnick on is how Screamin' A. Cosell (Stephen A. Smith) can get away with the stupid things he's said, as we've documented earlier this week, regarding Angels All-Star Shohei Ohtani. ESPN pays him a chunk of cheddar to be an idiot, just as Fox Shmooze pays morons like the Doocy brothers, Tabloid Carlson, Laura Inkblot, Spam Hannity, et al, to lie to the public.
I think the reason Screamin' A. doesn't get punished enough is because he'd turn on his bosses on the turn of a dime and play the victim, playing the race card. Yeah, sure. Like that'll work. NOT!
=====================================
Richard Sherman's career may be over.
The veteran defensive back, who has been with Seattle & San Francisco, was picked up the other day on a variety of charges, including burglary and domestic abuse. If the NFL takes an aggressive tack on the case, Sherman won't be playing this fall. We'll just have to stay tuned.
======================================
COVID has also hit the Olympic basketball team.
With the Tokyo games set to start in a week's time, Bradley Beal was cut after being placed in the protocols earlier this week. There are also calls to cancel the games for the 2nd straight year because of the Delta variant of COVID hitting Japan.
The medical drama that never ends, friends.
Posted by hobbyfan at 10:51 AM